Beginning Friday, February 24, Universal Orlando’s Blue Man Group show will be a little different. Known for its high energy music, comedy, lighting technology and art, the Blue Man Group’s new show promises all that and more. After a few weeks of the show being shut down, the new stage, additional LED screens and revamped show are ready to engage an audience once again.

The new show will encourage the audience to join the Blue Men as they explore the world’s obsession with cutting-edge technology. Three “Gi-Pads” (tablets that stand about 8 feet tall) are used to display tweets, blog posts and data. Will their funny display of our fascination of interacting with these new gadgets be insightful? Other apps on the Gi-Pads will highlight cats on sweepers, singing alpacas (small llama-like mammals) and other ‘curious matter.’

If you really liked the old Blue Man Group show, do not worry. About 50 percent of the new show has new content and 50 percent “classic” routines, says Blue Man co-founder Phil Stanton. Many fan favorites are still included in the show. Probably the most significant removal from the new production is the paper-frenzy finale. Where an extremely wide curtain of paper would be pulled over the spectators, intertwining and connecting them into one space – a new ending is in place. Giant helium filled lighted balls will float out among the spectators for folks to interact with. 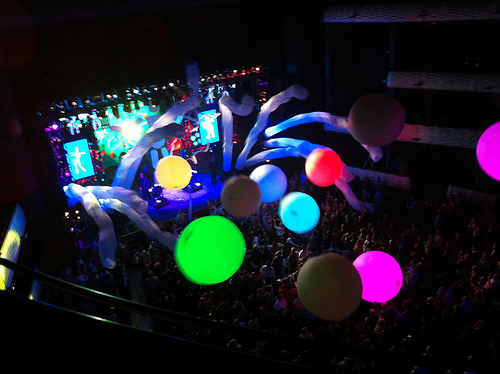 If you are a big fan of the Blue Man Group, check out their Facebook page. The Blue Man Group Insiders will be holding a Fan Meet on Saturday, March 3, 2012 at the Sharp Aquos Theatre at Universal Orlando Resort. Attendees will be able to get a group discount of 20 percent off seats (around $63 per person with the discount). You will be able to watch their sound check at 4:30 p.m. and meet the performers out of makeup. After the sound check there will be a special “Fan Meet Dinner” at Bubba Gump Shrimp Co., then special access to the brand new “Bluephoria” Lounge before and after the show, including an opportunity to meet with the Blue Men.

Regular show ticket prices start at $69.00 Adult and $29.00 Child. The best value of course is when the show tickets are included with a park pass. Many options are available for combination packages. Gift certificates are also available by calling 407-BLUE-MAN or visiting the Blue Man Group Orlando Box Office. All tickets can be purchased online. For more information, go to www.universalorlando.com/blueman.