Thinking about traveling out to the new LegoLand theme park when it opens October 15? Many families will be considering it, however, there is always that dreaded drive. Not now! LegoLand has recently announced a shuttle service plan in partnership with Annett Bus Lines.

The round-trip shuttle bus will depart Orlando Premium Outlets on Vineland Avenue in Orlando at 9:00 a.m. (arrive 30 minutes prior to departure) and will return after the theme park closes (5:00 p.m. in October). The price is only $5 per person – at least for now. LegoLand will increase the tickets to $10, but they are not revealing when the price increase will happen, i.e. how long the introductory round-trip price will continue. Reservations are required. You can purchase and make your reservation online. Seats without a reservation will be sold on a first-come, first-serve basis depending upon availability. 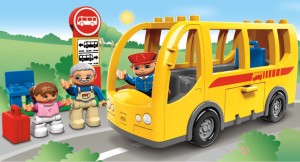 you are a family with small children, you will need to bring your child’s own booster seat or infant car seat. Each rider will have their own seat belt. The trip will take approximately 45 minutes traveling south (west) I-4. Parents are free to interact with their children during this ride, instead of dealing with the sometimes-not-so-pleasant traffic along I-4. However, eating and drinking are not allowed on the bus. Better find other ways to keep your kids entertained! Perhaps the Lego Duplo toy bus (pictured here) will help! If you need more information, call 1.877.350.LEGO.

At Capone’s Dinner & Show, we also offer a transportation shuttle service, partnering with Maingate Taxi. Since many adults like to take advantage of our all-you-can-drink beverage service that is included in the price of a ticket, letting someone else do the driving is a great idea. No one in your party has to be the designated driver! It’s a great way to enjoy the Orlando dinner show and not have to worry about the trip back to your hotel or neighborhood. Call Capone’s if you need more information, or book your transportation direct by calling Maingate Taxi at 407-390-0000 and press 2. 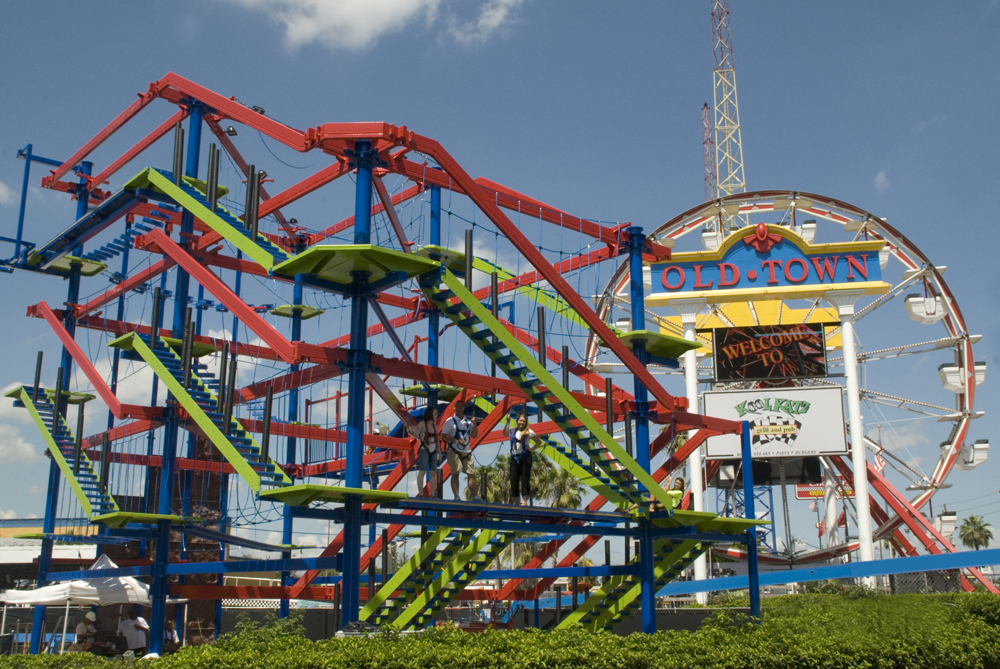 A few years ago I had never heard of zip lining. Now it is offered nearly everywhere! No longer do you have to go on a shore excursion off a cruise to some faraway country to zip across forests, lakes and… Old Town! Old Town? Yes. The very one located at 5770 West Irlo Bronson Memorial Highway (Hwy. 192) in Kissimmee now has a zip line course.

Known for its shopping, dining, Ferris wheel and car shows, Old Town is now offering a climbing wall, rope course and zip line adventure. The Pepsi AMPVenture Experience is comprised of a four-story (40 feet) rope challenge course where you can test your strength, balance and endurance while maneuvering through the rope/obstacle course. The rock climbing wall is 35 feet high and offers experienced and not-so-experienced climbers enough challenges to fill an entire day. The highest of them all is the ‘out and back’ zip line at a maximum height of 45 feet. This new experience marks the beginning of a new and exciting Old Town which has been taken over by a new management entity, Brothers Enterprises Management Group (BEMG). At a reported cost of $2 million dollars, let’s hope the excitement pays off.

So what will it cost you to climb, maneuver and zip? “The course is an awesome experience the entire family can enjoy together and we are able to offer it at an incredible price which we believe is imperative in this economic environment,” says  Gary Conroy, President. The Ultimate AMPVenture Experience wristband costs $39.95 which includes one entry to the zip line, adventure course and rock climbing wall, plus unlimited rides all day on Old Town’s rides. A la carte access to the zip line or adventure course is available for $12 each. Guests must be at least 36 inches tall to participate with an adult, and at least 48 inches tall to participate by themselves. Each person must also weigh less than 300 pounds and be wearing secure shoes.

Old Town features numerous other carnival rides, has several restaurants and a plethora of specialty shops with more shops scheduled to open later this year. Their Saturday Nite Cruise is now joined by a new weekly event for car lovers – the All American Muscle Car Cruise on Friday night. Show-quality American-made muscle cars from 1964 to current are featured, including Camaros, Mustangs and much more. Live classic rock music bands perform on the Main Stage.

Spend a day at Old Town, and an evening if you’re not too tired from all of that climbing and zipping. Then head on down the road east to Capone’s Dinner & Show. Spend an evening in air conditioning while you relax, dine and laugh during our exciting, funny, singin’ and dancin’ speakeasy. Our Orlando dinner show adventure, while not AMP’d, is sure to be just as enjoyable, and a whole lot less demanding!

Beginning June 16, visitors to Gatorland will have the opportunity to soar over dozens of alligators and crocodiles on the Screamin’ Gator Zip Line. It is the first zip line to offer such a thrill with five intense zip lines. These lines vary in length from 230 feet to more than 500 feet from heights of up to 65 feet in the air.

Participants start at the “Gator Grunt Run” which is a 247-foot line launching from 45 feet. The ‘zippee’ can reach speeds up to 15 mph. The next line “Gat-or Dun Run” is 40 feet longer and zips you along at about 20 mph. This is all done, mind you, over alligators and crocodiles swimming underneath! Then you’ll experience “De-Nile” a zip line 5 stories high over the oldest and largest alligators. “The Widow Maker” is next. Now you are zipping from 7 stories high! Then it’s on to the last and final zip – if you make it there. The “Hold Your Water Crossing” can only be reached by walking across a swinging bridge 160 feet above the theme park where the alligator feeding area awaits below. Talk about an adventure!

The entire experience lasts about 2 and a half hours. Each participant is given a safety and orientation session, helmet, gloves and a harness. You’ll be led by highly trained guides who also love to share their stories and myths about the theme park’s critters. You must be at least 60 lbs and no more that 275 lbs. Closed toe shoes are required and proper dress encouraged (hair and clothing should be kept secured and away from the pulleys attaching harnesses to cables). You will, of course, be required to sign a release and make a reservation.

The cost is only $69.99 which includes all day admission to Gatorland. If your scheduled launch time is canceled due to inclement weather, rain checks are issued for use within a year of your originally scheduled appointment. Booking can be done online.

A zip line feature is a great addition to this theme park and Central Florida. While zip lines are quickly becoming popular all over the world, it makes sense to have another adventure such as this at Gatorland. Now everyone can take in the view that only feathered friends were able to. Let’s just hope the stars of the park don’t receive any special dinner treats!

Gatorland is just a few minutes away from Capone’s Dinner & Show. After your zip line adventure, we’d like to invite you and your adventurous friends and family to enjoy our dinner show. While our show may not be “furiously thrilling” it can be ridiculously enjoyable by guests of all ages.

By Carla Sinclair-Wells on May 13, 2011 in Attractions Coming to Orlando, Orlando Tourism News
Updated by Admin: Friday, January 19, 2018

Star Wars Weekends 2011 is returning to Hollywood Studios, every Friday, Saturday and Sunday from May 20-June 12. The return is just in time to celebrate the grand opening of the new Star Tours attraction on May 20. The revamped ride has been redesigned so guests will experience new droids and new destinations, all in 3D and features a new film shot by filmmaker George Lucas’ studio. It is Disney World’s marquee addition for this year.

Whether it’s a battle with Darth Vader and his legion of stormtroopers or a plea from Princess Leia to help her save the Rebellion, may the force be with you while you experience this revamped attraction and enjoy a Star Wars weekend. When you’re finished celebrating with Jedi, Ewoks, Wookiees, galactic bounty hunters and stormtroopers, come on over to Capone’s Dinner & Show. Take a trip from another galaxy back to 1930s Chicago where your crew can meangle with our gang of  beautiful dames and handsome wise guys. It’s entertaining, fun and filling with our dinner buffet. Join ‘the family’ and enjoy the show!

We here at Capone’s Dinner and Show love theater and we are looking forward to the Florida Film Festival coming to Central Florida April 8-17th!  This 10-day festival will celebrate their 20th anniversary with a salute to Florida.  The many sides of the state will be celebrated, from the FL Keys to the black mud of the everglades; from Walt Disney World to the beach.  There are so many different aspects of our wonderful state!  And, you wouldn’t believe how many films were shot in Florida, from Scarface to Striptease, to Cape Fear; the list goes on & on.

This festival will premiere the best in cutting-edge, current cinema, with a mix of special events and industry parties.  Some of the highlights will be Flavors of Florida, a film and food celebration of Florida traditions showcasing authentic flavors such as soft shell crab, fresh-squeezed citrus, sweet tea, key lime pie, braised swamp cabbage, and more.  Dinner AND theater? Gotta love that!

The Florida Film Fantasies Gallery is the result of community members that were asked “What is the name of YOUR Florida movie?  What does it look like?”  It features personal images and film titles that best illustrates the Florida film of their fantasies.  And, the best part is YOU can do it too!  Use your personal experiences or mementos to capture your fantasy of Florida, and submit your image.

There are many great movies to see, as well as forums and special guests that include filmmaker Victor Nunez, creator of Ulee’s Gold. Also appearing is legendary chef Norman Van Aken of NORMAN’S Restaurant, Scott Jones, former Executive Food Editor for Southern Living magazine, and many more.

There are several ticket packages available, starting at $40, and going up to $650 Platinum Passes, so there is a ticket package available for everyone.  Don’t miss the opening night film and party!