By Carla Sinclair-Wells on August 7, 2013 in Dinner Show Reviews

This past year, Capone’s Dinner & Show marked its 20th anniversary and produced a new show, revamping a 10-year run from the last new show. This coming year, Arabian Nights dinner show will be celebrating their 25th anniversary. They are now featuring a new show called, “The Royal Celebration.” This is significant, because it will be the first complete revision of the show in 14 years. 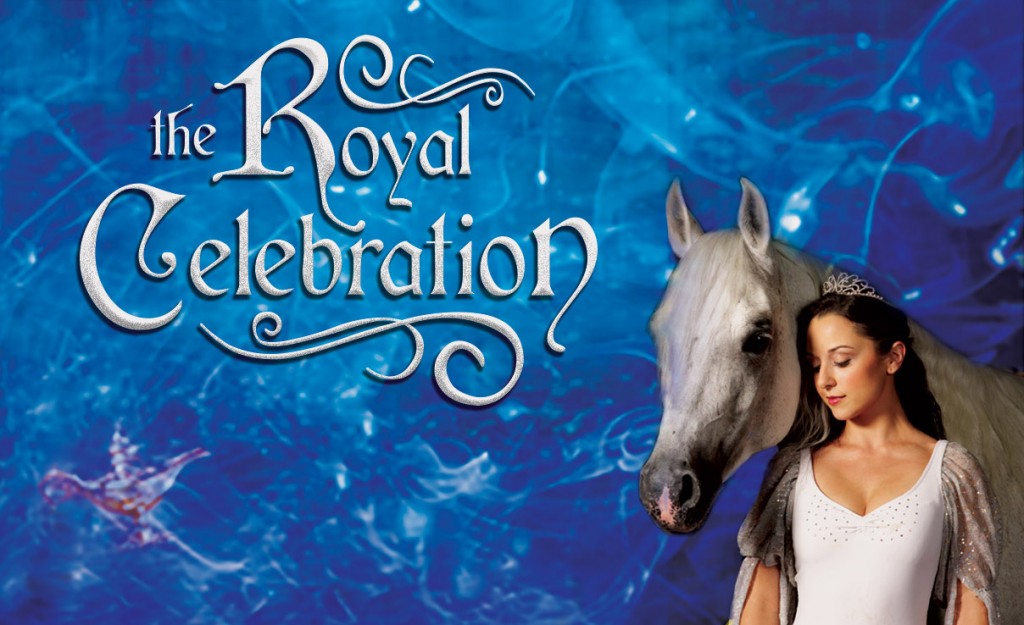 This Orlando dinner show spins a tale of romance and magic taking place on the wedding day of Princess Amirah. Her groom is none other than Prince Raswan from another tribe. These two kingdoms are the most powerful kingdoms in the Empire, so, as you might expect, it reckons to be a royal event. You can also expect a little rivalry between these 2 tribes. Can they come together as the prince and princess have?

This Orlando dinner show has not forgotten what has made it a favorite amongst dinner show guests. The horses. The famous Al-Marah Arabian horses are spectacular. They are joined with 12 other breeds including American Quarter horses, Belgian draft horses and Percherons. Just as Capone’s has kept some of their guests’ favorite parts of the show in all of their sequels, including the stand-up comedy portion of the show, Arabian Nights has kept a few of their guest favorites in this new show. For one, the Black Arabian Stallion along with its highly skilled rider remain a large part of the show and are sure to impress.

The new show at Arabian Nights features new costumes, music and interior decor. Sound familiar? It should. Capone’s Dinner & Show has shown a great amount of success when they renovated their theater, added new sets, lighting, sound and costumes. For guests that return from a previous visit, it can make a big difference.

While some of the reviews of this new show at Arabian Nights have not been well received, most horse-lovers will appreciate the incredible beauty of the horses in the show and the difficulty of the routines they perform. They are not looking so much for a plot to the show, but can enjoy the dinner show for what it is. Capone’s Dinner Show offers two different shows for their guests. This comes after numerous requests to bring back their old show once their die-hard fans had a chance to experience the all-new anniversary show. Now guests get the best of both worlds, a new show and a favorite show.

Capone’s Dinner & Show has implemented many food changes during their big anniversary year. A new salad bar has been set up with fresh seasonal favorites. Having it separate from the rest of the food has sped up the line to the buffet. This Orlando dinner show has also included a meat carving station with steak, turkey and pork. This ensures freshness and a nice variety. Arabian Nights has not changed this portion of their dinner show ticket. The bleacher-style seating and plated food remain the same. They have added VIP tickets and an unlimited drink ticket package, which, unlike Capone’s, cost extra, but is reasonable.

If you’ve attended Arabian Nights recently and have comments, please share them on our blog. We’d like to know your thoughts about the new show at Arabian Nights in Orlando. 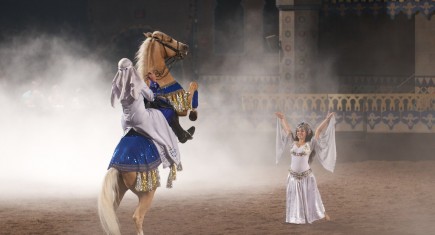 When you’re planning on going out to eat, you could go with the mundane world of chain restaurants or even fast food, or you can take the evening and make it purely magical. What if you were granted 3 wishes by a genie in a lamp? Would you ask for entertainment? Food? Fun? Well if you venture forward to find one of the many Orlando dinner shows, you will see that one getting fair reviews is none other than Arabian Nights Dinner Theater. This kaleidoscope of intrigue takes you back to another time, another place, where princesses and princes of mighty empires created daredevil theatrics, genies were trapped in lamps, and wishes were granted to those that would find them.

When you venture into the world of Arabian Nights, you will be treated to dinner that will consist of a variety of traditional cuisine from around the world. You will not only get a basic menu to choose from, you can upgrade your selection to specials and more. While you enjoy your meal you will be dazzled by some of the most talented men and women you’ll ever have the pleasure of meeting. The Arabian Princes and their royal friends will treat you to an arena show presented by beautiful horses and amazing daredevil traditional feats. You will ooh and awe amidst family, friends, and newfound neighbors as you all take in an experience of a lifetime.

Amongst Orlando dinner shows, this is one of the top rated options due in large part to the fact that it truly rings to a different time, and separates itself from the other dinner shows that you might find. While most people aren’t quite sure what to expect when venturing forth with this option, by nights end, and the wishes have been granted, everyone will have a smile on their face.

If you don’t want to travel so far back in time and space, why not venture forth to something a little more recent. Check out Capone’s for a little taste of the era where mobsters ran rampant and speakeasy taverns were all the rage. The iconic characters of a different place in American history will dazzle, razzle and offer a buffet of traditional fair that will definitely please even the toughest of critics. You can’t go wrong with either option, especially if you’re seeking something fresh, new and entertaining for a night out with the family or a special date.

Editor’s note: For our spotlight review of Arabian Nights, click here. For a listing of Orlando dinner shows, see our dinner show directory, or read a quick synopsis of each show here. For information on what to expect from Orlando’s dinner shows in general, read this post.

It’s a blast from the past and fun for all ages!  Mobsters, dames, Al Capone, Buggs Moran and speakeasies take you back to another era. You see it is 1931 gangland Chicago and Al Capone invites you to experience his one of a kind show. Capone’s blends an awful lot of different show concepts wrapped into one. Beautiful dancing girls, stand up comedy, upbeat musical productions, loads of comedy and guest interaction with the cast. We also offer the most choices of delicious food on our huge buffet plus we also include with ticket price Bud Light draft, wine, cocktails, the usual soda choices, Kiddy Cocktails, fresh brewed iced tea, cranberry juice and fruit punch. Desserts included too Al’s a very generous guy. Visit our web site www.alcapones.com for full menu selection.

One of the most often asked questions we get asked at Capone’s Dinner & Show is if it is suitable for children. It’s also the hardest question to answer because so much depends on what kind of parent you are. We have had many repeat schools attend our show but if you are very conservitive and far right religiously,  then my recomendation for an Orlando Dinner Show for your family would be Medieval Times because of the quality of it’s production and it is very family friendly. However be prepared to spend more on Medieval Times visit www.medievaltimes.com for the best prices when you buy online and then compare Medieval Times prices to Capone’s Dinner & Show. For over 17 years we have discounted our tickets direct to the general public. There’s no middleman with Capone’s. Arabian Nights tickets you can get from resellers for just a few dollars more than Capone’s but in my opinion the quality just isn’t there. Arabian Nights gives a large margin to ticket resellers. Save the middleman profit and perhaps a time share spiel when you visit Capone’s Dinner & Show.

I hope you’ll consider checking out our web site www.alcapones.com and decide for yourself.

So what should a tourist who’s in Orlando right now do today? Theme parks and water parks are definitly not a good choice for today. The Orlando area luckily has many indoor options on ways to spend your day and night. Todays a great day to sleep in and get a later start I promise you the theme parks will be slow. If you can handle this weather though you’ll breeze through attraction lines.

Here are some alternative ideas if you don’t want to brave the cold, sleet and possibly even snow today. Obvious choices include indoor malls which the best two for tourists are Florida Mall and Millenia Mall. All the outlet malls are outdoors so that may not be such a good choice. Depending on if you have children and the ages of your children indoor things to do include bounce houses, indoor attractions such as Ripley’s Believe it or not,Wonderworks, indoor flea markets of which there are many(largest is Flea World in Sanford and it offers circus acts and is more of a real flea market then the ones in the tourist corridors), Wonder Works and Titanic the exhibition.

Great eveving options include dinner shows of which there are numerous ones in Orlando including Medieval Times, Arabian Nights, Sleuths, Pirates Dinner Adventure and Capone’s Dinner & Show. I’ve listed the most popular and indoor of the dinner shows. It’s a great way to spend an evening and depending upon which you pick can be fun for all ages. We at Capone’s Dinner & Show feel we meet that criterion the best. I advise getting on the phone soon because on days like today the dinner show option is popular and if you want reservations and good seats call early. Visit www.alcapones.com to discover more about our one of a kind dinner show.