Everybody knows Capone’s Dinner Show is Italian, right? Well, knowing a little Irish mobster history will help connect this Kissimmee attraction to a delightful St. Patrick’s Day dinner show. Leprechauns, pots of gold and four leaf clovers are not mentioned at this speakeasy, but legends of another type are. One legendary figure is even written into the script!

There are no shortages of Irish mobsters in American history. Bootleggers, syndicate bosses and notorious godfathers controlled nearly everything at one time around Chicago, Philadelphia, and Boston. This dates back to the late 1800s. Remember the Great Chicago Fire in 1871? You know the one…

Late one night, when we were all in bed,
Misses O’Leary left a lantern in the shed.
And when the cow kicked it over,
she winked her eye and said,
“It’ll be a hot time in the old town tonight.”
FIRE, FIRE, FIRE!

This children’s song sprang from the infamous James ‘Big Jim’ O’Leary era of Irish mobster history. Seems his parents owned the barn where the famous fire was thought to have started. The arsonist cow was never proven guilty. However, O’Leary proved to be one of the most notorious Irish mobsters of all times. He controlled the gambling on Chicago’s South Side in the 1890s.

The mobsters at Capone’s Dinner Show also do a little ‘gambling’ upstairs in the Four Deuces Lounge. Upgrade to VIP tickets and experience a little of what ‘Big Jim’ controlled. Have a hot time in the old town! 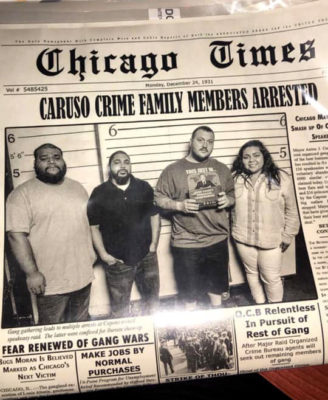 Another connection at this St. Patrick’s Day dinner can be found in the second most famous Irish mobster of all times – John Patrick Looney. If you’ve seen the movie “Road to Perdition” starring Paul Newman, this mobster is already familiar to you.

Looney was an attorney who started his own newspaper in Illinois. It was 1905 and there was a lot of money to be made extorting powerful people with the threat of running unflattering stories in the news. After he sold the newspaper business, he turned his attention to gambling, brothels, speakeasies and protecting illicit liquor traffic during the Prohibition era. Like Capone, Looney was eventually sentenced to prison for his crimes.

The St. Patrick’s Day dinner show connection with Looney can be found in a few ways. First, there are a lot of ‘looney’ characters in this show! Secondly, you can make headlines in the newspaper. Press coverage will even include a photo of your gang! It will only cost a small amount of ‘extortion’ money for you to keep a copy for yourself. 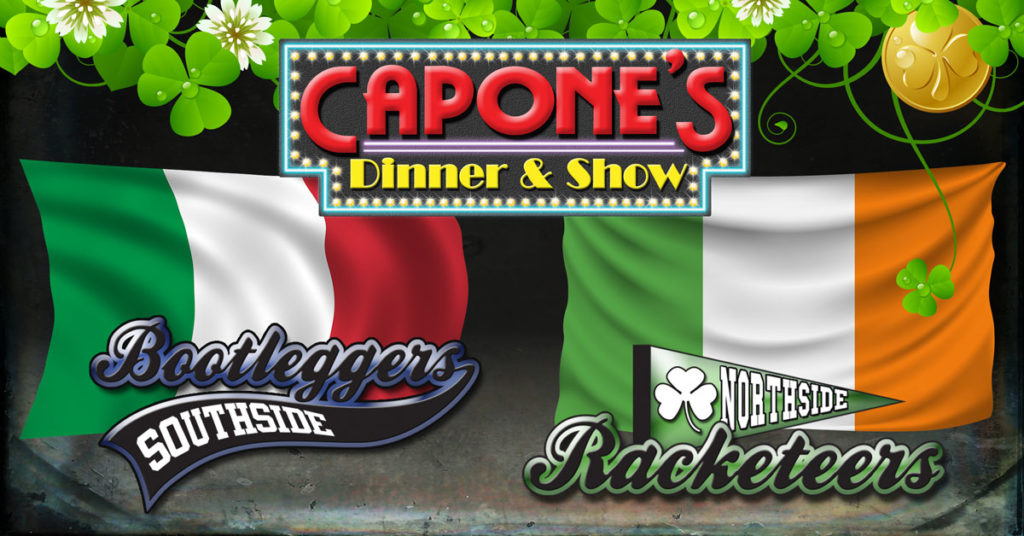 The third and fourth most famous Irish mobsters have a direct connection with Al Capone. Dean O’Banion controlled the bootlegging operations in Chicago’s North Side. In the 1931 film “The Public Enemy,” Jimmy Cagney’s character was based on O’Banion. This gang united with the Italian South Side mobsters in their bootlegging operations. This partnership included boss ‘Papa’ Johnny Torrio and his second-in-command, Al Capone. There was a little falling out – if you know your history. Does the St. Valentine’s Day Massacre in 1929 ring a bell? 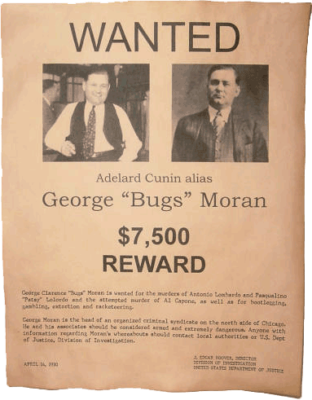 Lastly, if you’ve attended the St. Patrick’s Day dinner show at Capone’s before, you may recognize the name George ‘Bugs’ Moran. This Irish mobster shared a lifelong rivalry with Al Capone. Their bootleg operations were filled with back-and-forth retaliations during the Prohibition era. ‘Bugs’ was slang for “crazy” and George lived up to his name. He popularized drive-by shootings when he’d drive by Capone’s properties and pepper them with gunfire.

At Capone’s Dinner & Show, Bugs Moran’s character has been written into the script. He is every bit as crazy but in a good, funny way. Of course, Al’s gang doesn’t want anything to do with this Irish mobster. The cast may even warn you about him. Seems he’d like to take over this ‘operation’ as well. The hysterics will leave you in stitches.

There are many other Irish mobsters and their history is fascinating. If you’re interested, read about the 13 most famous Irish mobsters. Even without history, what makes a St. Patrick’s Day dinner so special at Capone’s Dinner & Show is YOU! Bring your gang whether you’re Irish or not. Expect to have a good time. Get into the era and let the characters at this speakeasy show you a good time. You might just create a little personal history along the way.