Ah, dinner and a show, what a great combination!  With all the Orlando entertainment options for both locals and tourists, Orlando dinner shows are a very enjoyable option.  And, there is a vast array of shows to choose from, with different themes, fun for the entire family!  Be sure to check out our dinner show directory for a brief description of our local dinner theaters.

In the meantime, let’s take a look at the history of the dinner theater.  Dinner theater (sometimes called dinner and a show) is a form of entertainment that combines a restaurant meal with a staged play or musical.   The earliest dinner theater dates all the way back to the Middle Ages.  The early theatres served dinner in one room and staged the show in another.

The first formal dinner theatre in the U.S. is the Barksdale Theatre, which was founded in 1953 in Richmond, VA.   The theatre started out using an adjoining room to serve buffet dinners for groups attending the show, and this eventually became available to all guests, becoming a dinner theatre.  However, Barksdale’s reputation is that of a theater that happens to have a restaurant; dinner is optional.  They want to keep their reputation of a professional theatre more than their reputation as a restaurant.

Even before Barksdale Theatre, Tony DeSantis began producing plays in 1949 in a tent adjacent to his Martinique Restaurant.  The success of these shows prompted him to build his first theatre, Drury Lane Evergreen Park, by 1958.  This was the first of six dinner theatres he started, and it was a local entertainment landmark for 45 years before it closed in 2003.

Then, in 1959, theatre student Bill Pullinsi implemented the first facility where dinner and the show were together in one room, utilizing the Presidential Arms Hotel during spring breaks from college.  After college, Pullinsi returned to his Chicago hometown and opened the Candlelight Dinner Playhouse.  With the Candlelight, several new innovations were brought to dinner theater.   Among these were the hydraulic stage, stage wagons on wheels, and lighting equipment located in the mezzanine.

Starting in 1961, Howard Douglass Wolfe created The Barn Dinner Theatre franchise, which included 27 theaters.  These theaters were strategically located in New York, North Carolina, Virginia, Texas, Tennessee, Georgia, and Louisiana.  All locations of the franchise featured Wolfe’s barn design and farm-themed decorations, and even his “magic stage”.  The magic stage was Wolfe’s patented elevator in which at the end of an act or scene, the stage would disappear into the ceiling, then reappear, all ready for the next scene.  Wolfe’s memorial cites him as the “Father of Dinner Theater”.  Several famous actors reportedly acted at The Barn, including Robert DeNiro and Mickey Rooney.

Read more in Part 2 – The History of Dinner Theater. 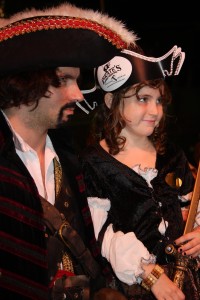 Although we’d rather have visitors choose Capone’s Dinner Show over any other dinner theater, many guests attend multiple shows during their vacation. Therefore, we’d like to provide our ‘review’ of the other shows in the area. In this post we spotlight Pirate’s Dinner Adventure. We’ll give you our favorable comments – then at the bottom of the article, we’ll provide a few reasons why we think Capone’s may be your better choice – if you’re only attending one dinner show.

Ahoy Mate, check out the Pirate’s Dinner Adventure Show for a swashbuckling good time.  This interactive show has  comedy, romance, acrobatics, a hearty feast, and plenty of action!  The ‘stage’ is actually a fully-rigged pirate ship!

The fun starts even before the show begins as you enjoy The Kings Festival, where you get to take pictures with pirates and enjoy appetizers, as well as a full bar.  You can purchase souvenirs from the gift shop.  You can also customize your adventure by upgrading your package to the Governor’s VIP Lounge Experience in the beautifully decorated Treasure Trove. The Governor’s VIP lounge is perfect for private parties (birthday, anniversary and wedding) or any special event.
(Tip: book in advance as seating is limited in the Treasure Trove and tends to sell out.)

During the show, enjoy a delicious three-course feast as the reprehensible pirate, Sebastian the Black, has captured the beautiful Princess Anita, her court AND the audience.  Audience members get to participate, and there are parts for both adults and children alike.  Dinner includes a salad or soup, chicken or pork main dish, complete with sides, and a royal dessert.  A great time for the entire family!

After this delightful show, check out the after-show party, The Buccaneer Bash.  The perfect end to an evening of adventure, you can meet the pirate crew from the show and dance the night away at this 70s-style disco.

Purchase your tickets online for a special discount. Be sure to choose the Orlando, Florida location, not the Buena Park in California dinner show. This is their other location.

Another option for adults is Treasure Tavern; a separate, 18 and older show located within the Pirate’s Dinner Adventure complex.  This 2-hour show is filled with comedy, acrobatic acts, live music, dancing, fantastic dining, and plenty of rum!  You can enjoy the signature Rum Punch, free upon entry (to those over 21).   Opened in 2010, this new show is a wonderful getaway from the ordinary.

Now that you are a little more familiar with Pirate’s Dinner Adventure, we’d like to share how Capone’s compares.