By Guest Writer on February 28, 2013 in Orlando Dinner Shows

When it comes to eating out in the Orlando area, you have a great deal of restaurants to choose from, but only a few Orlando dinner shows. You could go to your neighborhood diner, or go to another chain restaurant, or if you’re brave you can go see something special. The special options that are in the area are going to blow you away with sheer excitement as they are not just eateries, they offer full-scale productions that will take you and your family to a whole new world. No matter what you’re favorite genre of entertainment is, you’ll find that the many Orlando dinner shows will definitely be something that will change your perspective on eating out.

When you’re on the hunt for a nearby show, consider the following popular Orlando dinner shows options. 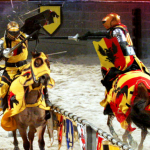 Medieval Times – Travel back to a time where kings and queens rules, a simpler time where jousting, horsemanship, falconry and chivalry lived. In this dinner and show you will be treated to a plethora of food, nay, a feast for the belly and a show for the eyes. Enjoy a little trip back in time where men fought for the heart of their ladies, in a traditional setting with a little modern flare. Once you step inside, you will truly feel like you’re amidst King Arthur, that’s for sure. 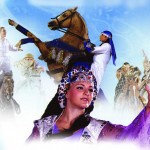 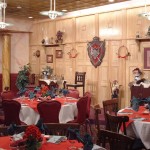 Sleuths Dinner Show – Sleuths presents something that will entertain, and even shock, but with a humorous twist that will definitely delight even the hardest skeptic. Venture back to a different setting and try to figure out who is responsible for a killing! This dinner mystery show is one-of-a-kind; full of jokes and detective work that will definitely please.

Pirates Dinner Adventure – Ahoy there! Venture forward with a full-scale pirate show including food and incredible stunts and performances from some of the wildest pirates you’ll ever meet. Pay close attention as you might end up finding treasure on this voyage of sight, sound and food. 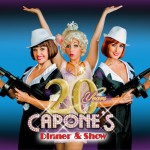 Capone’s – Enter the world of mobsters and speakeasy taverns, with traditional language and raucous amusement. The whole family will enjoy the trip back in time to when America had a different class of criminals. You’ll enjoy venturing forth with characters roaming around like Al Capone, Buggs Moran and many more.

The above are just some of the amazing Orlando dinner shows that you can venture towards, so make sure the next time you go out, you enjoy a show and a meal all wrapped into one.

As I mentioned in Part 1, the 1970s were the heyday of dinner theaters, and in 1976, there were 147 professional dinner theaters in operation.  It was very popular back then to use former movie stars in these productions.  A few stars who found success in dinner theatre are JoAnne Worley, Shelley Berman, Jane Russell, Van Johnson, and Lana Turner.  A few stars even owned their own dinner theaters, such as Burt Reynolds and Earl Holliman.

The dinner theater boom declined towards the mid-1980s, with many of the theaters closing down.  The aging stars started receiving offers for work in television and commercials, and so they stopped performing in dinner theater.  With TV or commercials, they were making more money. Show costs and food costs are the largest cost areas, and the main reasons for the drop in the popularity of Dinner Shows and Dinner Theaters.  The reduction in professional dinner theaters went from 147 in 1976 to 9 in 1999.

However, since that time, vacation destinations such as Las Vegas, Nevada; Florida; Branson, Missouri; Anaheim, and Los Angeles have seen the emergence of specialty dinner theatres, where the show stays the same for an extended run because the vast majority of their customers are tourists, not local residents.

Orlando, Florida, the most popular vacation destination in the United States, had more than a dozen competing for a share of the $17.3 Billion that tourists spent in 1999. Through the 1990s, sixteen Dinner Theaters opened and closed here.  The Orlando area has still managed to keep several entertaining dinner shows, including Capone’s Diner & Show; visit our dinner show directory for more information.  Most of the professional theaters still exist because they put on a great show, with a lot of audience participation.  Some of these specialty theaters include themes such as murder mystery, pirates, equestrian shows, and gangsters.

Ah, dinner and a show, what a great combination!  With all the Orlando entertainment options for both locals and tourists, Orlando dinner shows are a very enjoyable option.  And, there is a vast array of shows to choose from, with different themes, fun for the entire family!  Be sure to check out our dinner show directory for a brief description of our local dinner theaters.

In the meantime, let’s take a look at the history of the dinner theater.  Dinner theater (sometimes called dinner and a show) is a form of entertainment that combines a restaurant meal with a staged play or musical.   The earliest dinner theater dates all the way back to the Middle Ages.  The early theatres served dinner in one room and staged the show in another.

The first formal dinner theatre in the U.S. is the Barksdale Theatre, which was founded in 1953 in Richmond, VA.   The theatre started out using an adjoining room to serve buffet dinners for groups attending the show, and this eventually became available to all guests, becoming a dinner theatre.  However, Barksdale’s reputation is that of a theater that happens to have a restaurant; dinner is optional.  They want to keep their reputation of a professional theatre more than their reputation as a restaurant.

Even before Barksdale Theatre, Tony DeSantis began producing plays in 1949 in a tent adjacent to his Martinique Restaurant.  The success of these shows prompted him to build his first theatre, Drury Lane Evergreen Park, by 1958.  This was the first of six dinner theatres he started, and it was a local entertainment landmark for 45 years before it closed in 2003.

Then, in 1959, theatre student Bill Pullinsi implemented the first facility where dinner and the show were together in one room, utilizing the Presidential Arms Hotel during spring breaks from college.  After college, Pullinsi returned to his Chicago hometown and opened the Candlelight Dinner Playhouse.  With the Candlelight, several new innovations were brought to dinner theater.   Among these were the hydraulic stage, stage wagons on wheels, and lighting equipment located in the mezzanine.

Starting in 1961, Howard Douglass Wolfe created The Barn Dinner Theatre franchise, which included 27 theaters.  These theaters were strategically located in New York, North Carolina, Virginia, Texas, Tennessee, Georgia, and Louisiana.  All locations of the franchise featured Wolfe’s barn design and farm-themed decorations, and even his “magic stage”.  The magic stage was Wolfe’s patented elevator in which at the end of an act or scene, the stage would disappear into the ceiling, then reappear, all ready for the next scene.  Wolfe’s memorial cites him as the “Father of Dinner Theater”.  Several famous actors reportedly acted at The Barn, including Robert DeNiro and Mickey Rooney.

Read more in Part 2 – The History of Dinner Theater.