Although we'd rather have visitors choose Capone's Dinner Show over any other dinner theater, many guests attend multiple shows during their vacation. Therefore, we'd like to provide our 'review' of the other shows in the area. In this post we spotlight Medieval Times Dinner & Tournament. We'll give you our favorable comments - as well as some insight as to why Capone's may be your better choice - if you're only attending one dinner show.

This 11th century-style dinner attraction was inspired by the true medieval tradition of royal families inviting guests to a festival and feast to watch knights compete on horseback. You can't help but notice the Castle's towering white walls, complete with moat and drawbridge, in the Kissimmee landscape. The Castle also features an authentic eight-cottage medieval village. Some things have changed over the 27-year history of Medieval Times Dinner & Tournament, such as the characters and the storyline, but the commitment to the accuracy of the weapons and costumes of the times have not changed.

Royal guests are treated to a romantic, snowy rendezvous in the woods and an authentic sword fighting and medieval jousting tournament on horseback! This entertaining show really lets you get a glimpse into the years from the century of 1001 to 1100. Along with the kings and knights, the stars of this show include some very talented stallions. These magnificent horses are raised mainly at the Medieval Times? Chapel Creek Ranch in Sanger, Texas. This 241-acre ranch houses Quarter Horses, Menorcans, Friesians, and also breeds purebred Spanish Andalusians. They raise more than 400 horses here and begin training them early, introducing them to lead ropes and halters as weanlings. More initial training follows until age three, when they move to one of the nine Castles in North America. Here, they learn advanced-level dressage from a Master horse trainer. Then, they get to live the pampered life of a performer!

The general consensus of this attraction is the show is very entertaining, and the medieval village is interesting, but there is no staff on hand in the village to explain things to the guests. Things were sure a lot different in the 11th century so the average guest does not know what the artifacts were used for. The staff generally seems disinterested and robotic, not ?in character? like the staff at Capone's and some of the other dinner shows. They also have vendors running around during the show trying to sell you souvenirs. To me, this is a turn-off.

The show also includes a 4-course feast. This starts with soup, then chicken, ribs, potato and dessert, served by medieval characters. They do have a vegetarian meal available as well. Most people agree that the food was not the highlight of this show, and that the wait staff gets in the way of the show. Capone's 4-course meal is served HOT unlike pre-plated food with servers trying to deliver hundreds of plates of food to the guests while still hot - many guests receive cold food at other dinner show restaurants.

Medieval Times also tries to save money on their beverages by not keeping guests glasses full. I personally think the dinner at Medieval Times is probably the worst of any dinner shows in Orlando. In my opinion they would be better served increasing their quality of beverages and dinner. That?s the track we took at Capone's Dinner & Show and we have had to raise our prices slightly to deliver a tasty meal and upgraded beverage choices. We also offer the best selection of alcoholic and non alcoholic beverages. Medieval Times does not pour a premium draft and the only other choice for alcoholic beverages is wine.

As we've mentioned before, if you desire to attend Medieval Times, check with Medieval Times directly and then check out ticket resellers prices. Be sure and look at the differences on seating and upgrade deals. They have been offering discount prices direct to consumer, so you may actually pay more going thru a reseller.

Proud to have earned a
Certificate of Excellence
8 years in a row! 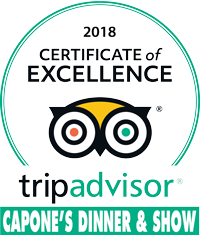 To visit ALL of our fans posts, or to post photos from YOUR visit to Capone's, please join us on Facebook and add yourself to our fan list!

Submit Your Own Dinner Show Review

If you would like to submit a comment about an Orlando dinner show or a review about Capone's Dinner & Show, contact Big Al. We love to receive feedback about our show and delicious dinner buffet.

You may also send us an E-mail or call one of our wise guys on the telephone.