To get the special treatment at The Four Deuces Lounge there is a one drink minimum purchase (can be a soda for $3.00) for each person in your party. In exchange for that drink you get early seating to your assigned seats before the general admission line, and since you're seated first, you get to order your 4-course meal first.

Read About Our Bootleg Spirits 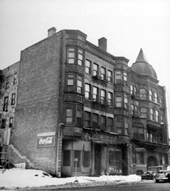 At the end of 1919, John Torrio took over a building on the 2222 block of South Wabash in the heart of Chicago's South side. An area known for gambling and prostitution, none were as infamous as the Four Deuces.

Two entrances could be used at the Four Deuces. One was through the saloon on the first floor and the other was through a doorway leading into a corridor just south of the saloon entrance. This second entrance would lead patrons through the barroom to the rear behind a partition. Once behind the partition, a left turn would lead to a stairway. On the second floor, many illegal activities took place.

Al Capone was sent to work for John Torrio, and in less than 2 years, he elevated to manager and part owner. He opened an office next door as profits from the joint quickly mutiplied, and used this store as a decoy selling used furniture under the name of Al Brown.

Al Capone later became the boss of the Four Deuces, but had to close up shop around 1923-24 when a newly elected mayor, who would have no part of this type of establishment could not be bought. 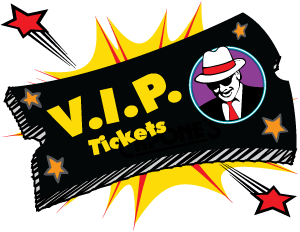 When you purchase VIP tickets to Capone's Dinner & Show, you are allowed early admission into Al's Four Deuces Lounge. You also may have a chance to meet some of the characters in the show (when available). The pre-show lounge also offers a choice of beverage in a take-home souvenir glass.

If you do not want to experience the Four Deuces, you are allowed instant admission at show time upon your arrival at the theater. VIP guests get the best seats in the house!

Be sure to select the VIP option when you purchase your tickets online. Only a limited number of tickets are sold each night.