If you’s lookin’ for excellent service while havin’ a meal, meet “Stretch.” He’s a real goon… I mean good guy, workin’ at my Speakeasy. All the servers at my joint are special, but this month’s featured ‘bruno’ is Stretch. As yous might be able to see from his mug shot, the numbers don’t lie. Stretch is a tall fella. Hince his name.

Stretch came ‘round from the Tampa area needing cabbage ‘bout two years ago. We’s lucky ‘nough to snag him into our gang. He’s a hard worker always providing excellent service pleasin’ the guests. Even the ones that don’ seem to want to be pleased. Yous know the ones. He takes it real personal when anyone doesn’t respect the experience him an’ his pals have worked so hard to create. So show some respect next time yous see him! Capisce?!

At Capone’s Dinner & Show, we expect extraordinary guest service and Stretch performs his duties well. So much so that guests ask for him on their return visits. This makes him feel real keen. He has a gift of blendin’ in his unique guest service skills while stayin’ true to his own character. And what a character he is!

One guest liked him so much, they licked his elbow while he was pourin’ a pitcher! We’s don’ know why. Maybe they’s were real thirsty, but we’re hopin’ it was a sign of endearment, not some way of spreadin’ somethin’ we’s don’ need ‘round here. Perhaps they thought they were in some hash house, ‘nstead of my classy joint. Either way, Stretch handled it with professionalism and performed his duties without skipping a beat.

If you’d like to meet Stretch, or any of my wise guys and gals here at Capone’s Dinner & Show, we’ve made it easy. Jus’ buy your tickets online at half price! Come to our speakeasy an’ let Stretch an’ the gang show yous a great time. Your entire family will enjoy the show and receive excellent service. The food will fill yous up, and the evenin’ will be one for the history books.

While you’re my guest at Capone’s Dinner & Show, be sure to meet Stretch. He’s not hard to find; jus’ look for the tallest server here. He loves to meet people of all types. After a long, frustrating day at a theme park, or doin’ whatever you’s doin’, Stretch will turn your day ‘round with excellent service. Your gang will be lookin’ up… and up …and up! 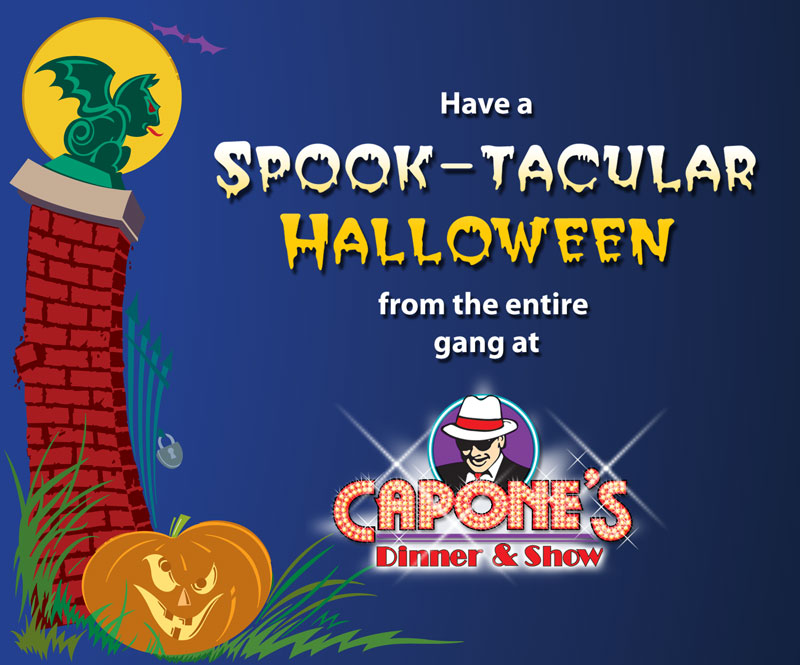 Al and the gang wish to congratulate George Seal for being April’s Grand Prize winner at Capone’s Dinner & Show Tuesday, April 25th. During our “25 Years of Memories” anniversary celebration we’ll be giving some lucky stiff a grand prize on the 25th day of each month. Next month it could be you! The next grand prize will be awarded on Thursday, May 25, 2017.

George, a.k.a. Lefty (now that he is a ‘made’ man) came all the way from Conyers, Georgia just to see the show! Imagine that. What a dedicated family member! Seeings this was Lefty’s first time at our speakeasy, the wise guys and gals had the honor of showing him around. And around. All left turns. Sees that’s why he’s known as “Lefty.” Not because he writes with his left hand. No, he makes a lot of left turns and never wants to be left out! 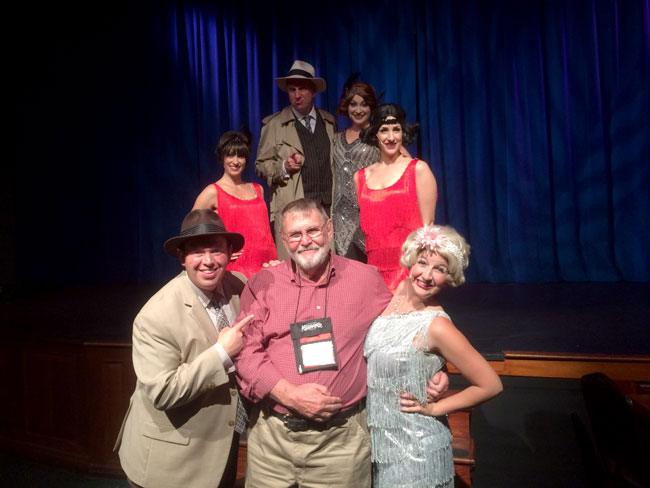 “Lefty” was the big winner of April’s anniversary prize.

Lefty’s favorite part of the show was the food and atmosphere. He was also partial to the staff. Yous sees we work hard to treat yous like family. Only the best will do for our guests!

In fact, Lefty liked the entire Capone’s dinner show experience. He had nothin’ he didn’t take a liken to. What an easy going fella!

Lefty’s prize was $250 in cash and a “C” note to spend in our gift shop. Knowin’ this pal, he’ll probably waste his prize on broads and booze. Okay, so it’s not a waste. We know many of yous would do the same. At least he ‘left’ with some great souvenirs from our gift shop. We have T-shirts, wine glasses, beer mugs, posters, keychains and many other items for sale. Be sure to pick up something to remember your night with the family before or after the all-new show.

Speaking of family, thankfully, Lefty’s family told him about our speakeasy. When relatives show up on your doorstep, Capone’s is a great place to take ‘em to. Where else can you feed a free-loader and keep them entertained for over 2 hours for less than $36 (including tax)? Regardless of the age of your company, our joint is one of the best entertainment values in the Orlando area.

Again, we’d like to congratulate April’s grand prize winner, George Seal. Capone’s Dinner & Show hopes that the evening’s experience was the cat’s meow and will be a great memory for years to come. 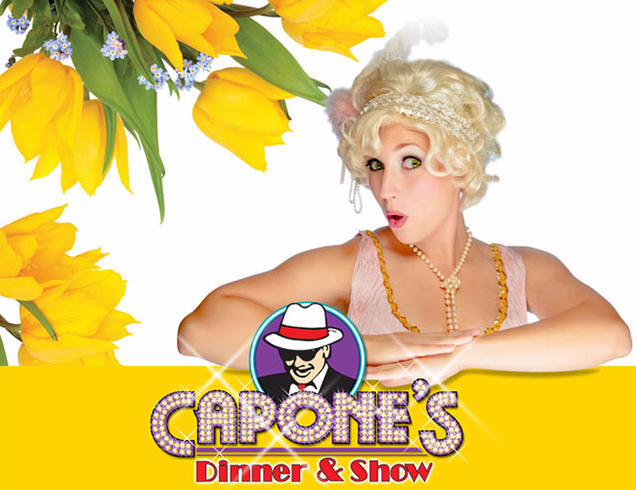 EDITOR’S NOTE: You may need to reference our 1920’s Slang Dictionary to fully appreciate (and understand) Al’s written intentions within this message.

Make Plans Now! Mother’s Day is May 12, 2019, and we knows hows yous chumps are. You’ll mess ’round an forget to plan somethin’ special for the dame in your life. So’s we decided to give yous an early reminder to make plans for Mother’s Day…now!

Don’t dangle or start nothin’ else ’til yous click the button below an’ make your reservation. It takes less than 5 minutes. The earlier yous do this, the better seats yous get. Capisce?!

Make plans now to treat the dish in your life to a special dinner & show at my joint! On Mother’s Day, every dame that walks through the door to the speakeasy receives a flower from me an’ the gang. Plus, yous should see the spread (buffet) Mama Capone is puttin’ out! And, hey, nobody’s got to do the dishes! How great is that?! She’s your cat’s meow, so’s don’ mess it up!

Bring your frau (wife), bring your mom, bring your kids. All ages love Capone’s Dinner and Show. Plus, it’s affordable!

Treat your squeeze like the kitten she really is! Go on, spend a little dough. Upgrade your ticket to VIP status! For an additional $12/adult and $9/kid (4-12) per ticket, VIP tickets will get yous these extras:

Sure, yous could give your bim some ice or marbles on Mother’s Day, but why not save a few fins and spend some time with her and the family?! Join Mama Capone & the rest of the gang.

NOTE TO OUR READERS: To follow Al’s writing about Spring Training in Central Florida, you might want to refer to our slang dictionary. We’ve underlined the words you might need to look up. Enjoy his article! 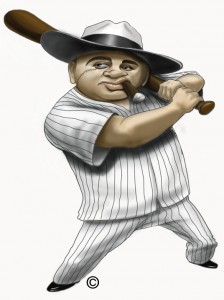 Big Al here. It’s been awhile since I’ve had a chance to do any peaching here on my blog. Things are really hoppin’ at my joint over at Capone’s Dinner & Show. Word is gettin’ out ‘bout my specials and the 25th anniversary party! Prohibition ain’t gonna stop the nightly party at my speakeasy!

This is one of my favorite times of the year. Spring Training in Central Florida is when me and the mob are gonna get to use our bats for another game – not just for inspiration. Savvy?

If you’re a Braves cat, it’s easier to gun for a game in Central Florida. The Braves train jus’ up the road at Disney’s Wild World of Sports. West of Orlando, the Tigers training home is in Lakeland; Yankees in Tampa; Phillies in Clearwater and Blue Jays in Dunedin. There are other teams doin’ their Spring Training in Central & South Florida if you want to check them out on this really keen web site at www.floridagrapefruitleague.com.

Spring Training in Central Florida started February 25th this year and ends April 1st. The teams play every day, so there is plenty of Chicago lightning. There are “away games” and “home games” so be sures to check your team’s schedule an’ show up at the correct stadium. Some days they even play a double header! That’s ‘bout as much action as watchin’ bangtails!

Individual game tickets range from $15 to $60 depending upon the stadium and where you want to sit. You can buy a multi-ticket plan and see more than one game. Those are the bees knees. Some of the stadiums and teams even offer a meal plan including hot dogs, popcorn, nachos, soft drinks and bottled water. Keep in mind, most stadiums also charge for parking – somethin’ we never do at my Kissimmee attraction. 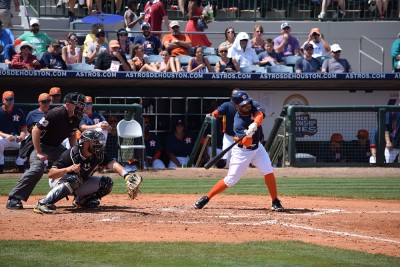 After the Game, Join the Gang!

Speakin’ of meals, I know that afternoon baseball game snack ain’t gonna fill any of yous up, so that is why I want to personally invite yous to my Kissimmee dinner show. Every evening Mama Capone puts out a spread unlike any other dinner show in Orlando. This ain’t no hash house either, it’s an Italian/American buffet fit for a high pillow. Buffet dinner and drinks (giggle juice too) is hard to beat! Plus, if you order your tickets online, I’ll make it right and let yous glaum them at half off the ticket price! That ends up – with the government’s cabbage (tax) – being only $35.46 for adults and $22.56 kids 4-12. Add a little extra an’ be treated like a big boss with a VIP upgrade.

Now for some serious matters… It’s well-known that Buggs Moran has been tryin’ to take over my joint for quite some time. It bein’ March and all, those Irish are startin’ to come ’round. Things are a bit hinky. To encourage support for me an’ my gang, I’m gonna offer 2 shows per night on March 11 – one early show at 5:00pm and a late show at 8:30pm.  Then on March 22nd we’ll have two shows – one a matinee at 1:00pm and the evening show at 7:30pm. Experience a little friendly competition here at Capone’s Dinner & Show, especially durin’ the Gangster Shootout! You won’t want to miss the action as my gang puts all this spring training to use!

Enjoy Spring Training in Central Florida and be sure to stop by my speakeasy and tip a few. Everyone on your team will have a good time at Capone’s Dinner & Show!