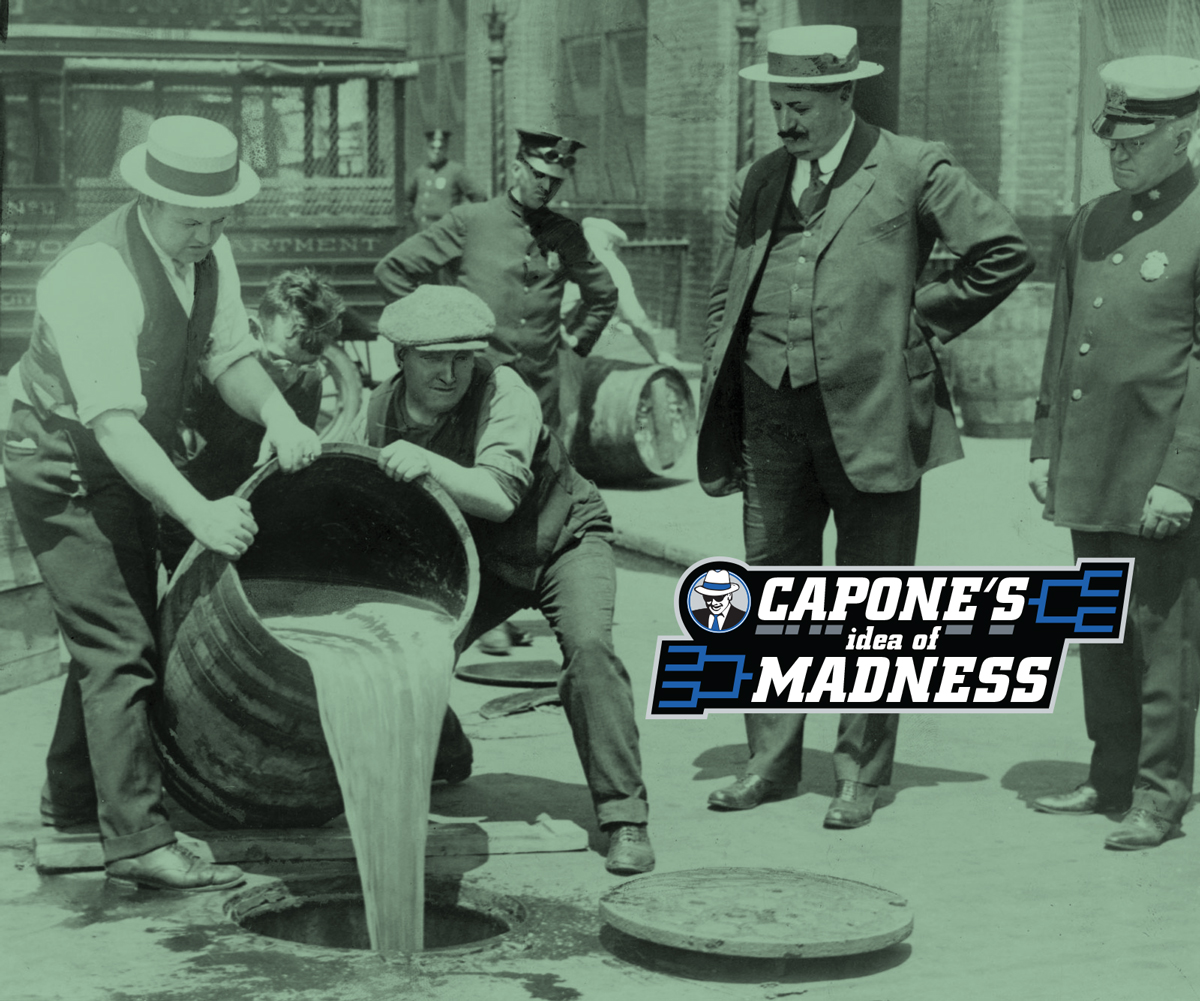 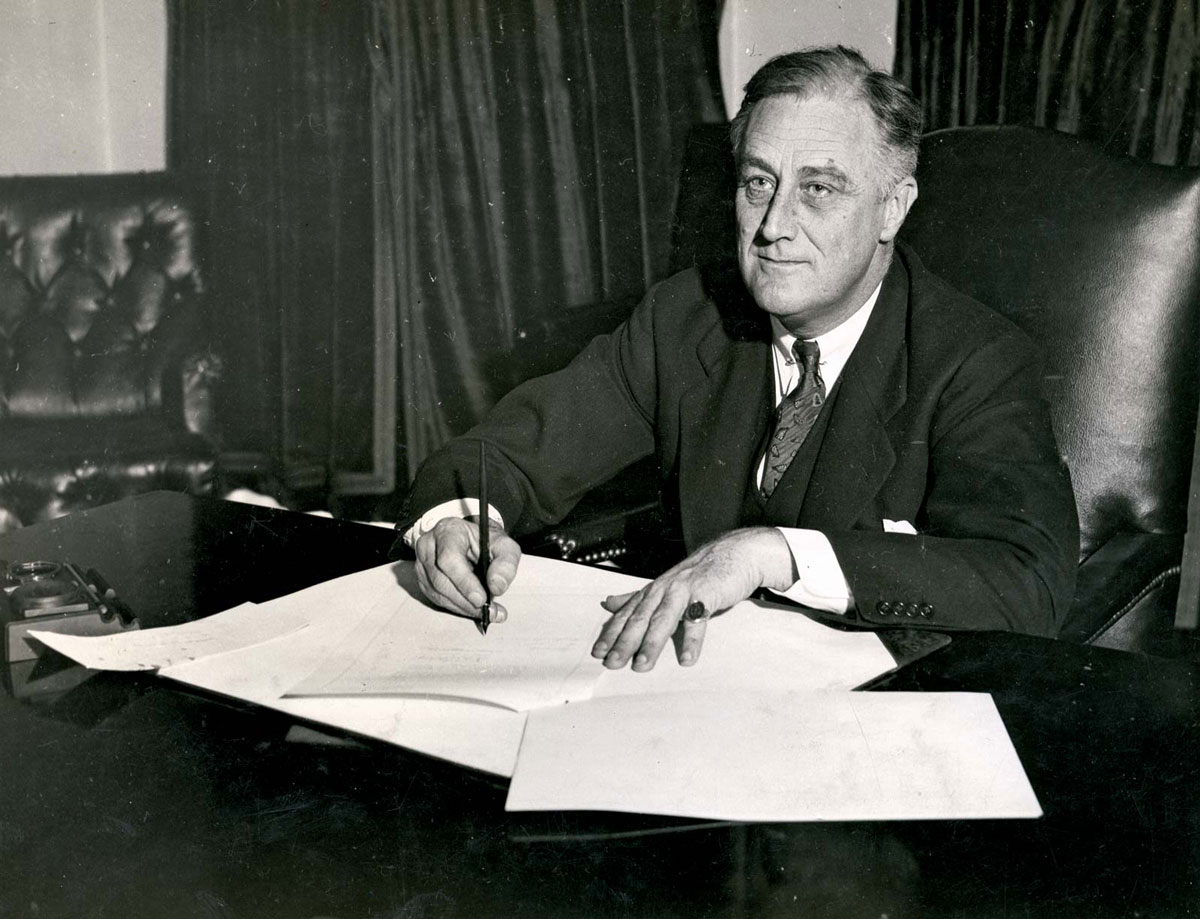 Groups are welcome at Al’s joint. Sweet sixteen? No problem. The wise guys and gals can accommodate large parties. Not ready for that? Bring your starting five, or maybe a final four, or a championship of two. The gang will seat you at your own table.** Then let the madness begin.

**Mid-march Update: On busy nights, parties may now be sharing a long table with other groups of people. If this lack of spacing is of concern to you, please notify us at the time of your reservation. Request a private table (near the back). We will attempt to space guests as much as possible. We are thankful for the return of guests. Thank you for your patience as we begin this transition to normalcy.

Capone’s Award-Winning Experience has received an award 10 years in a row! Capone’s Dinner & Show was first awarded a TripAdvisor honor in 2011 (for 2010). We’ve repeated every year since! Talk about a repeat performance! 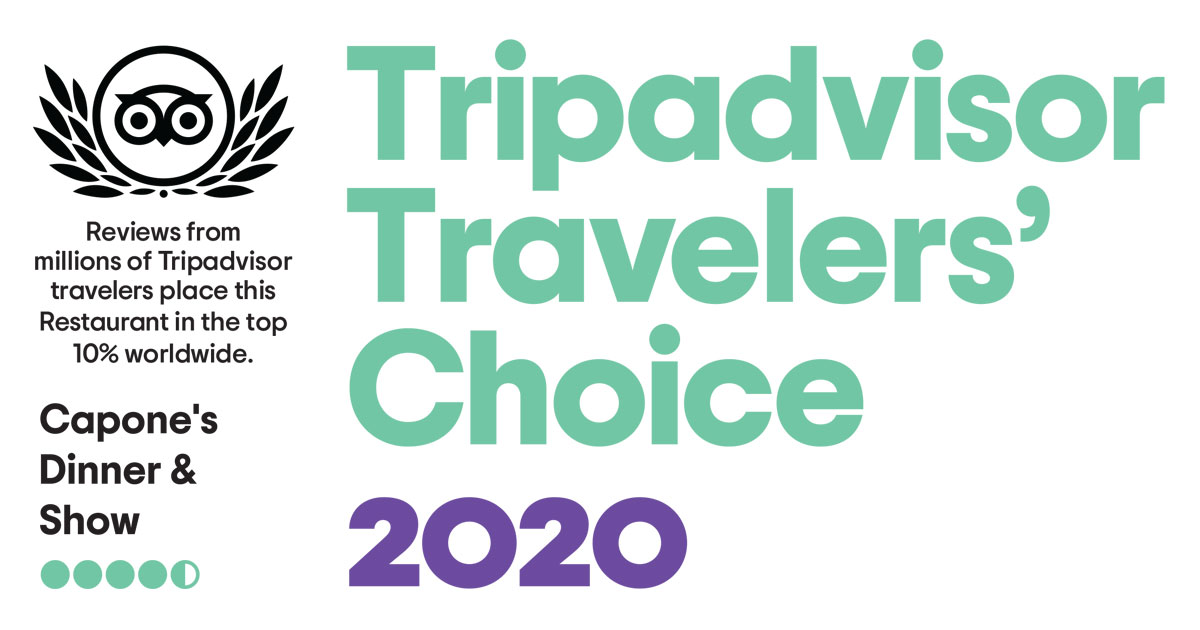 Prior to this year, TripAdvisor honored top-rated lodging businesses, restaurants, attractions, and more, with a Certificate of Excellence. This year they have changed the name to Tripadvisor Travelers’ Choice award. The Capone’s award-winning experience is based on reviews by travelers on the world’s largest travel site. To be eligible, a business must maintain an overall rating of four or higher (out of five), as reviewed by travelers on TripAdvisor. The volume of reviews received within the last 12 months is also taken into account.

“Capone’s is pleased to receive a TripAdvisor Travelers’ Choice award,” said John Kucik, President at Capone’s Dinner & Show.  “We strive to offer our customers a memorable experience, and this accolade is evidence that our hard work is translating into positive reviews.”

We’d like to thank everyone for their positive reviews! Since our experience has been award-winning for 10 years in a row, many factors contribute to our success. The show, excellent wait staff, great ticket value, and a host of other reasons. Not only have the positive reviews appeared on TripAdvisor, but also on Facebook and Google.

TripAdvisor lists our Orlando dinner show as a Kissimmee attraction. So, next time you are online, take a moment to read the reviews of all the attractions in Orlando and Kissimmee. If you are planning a trip away from this area, check out the millions of reviews on TripAdvisor. It is the world’s largest travel site and is a great way to plan the perfect trip. If you’ve been to Capone’s Dinner & Show and have a moment while you’re online, we’d appreciate a “5-dot” positive review.

Finally, speak with your server before leaving the theater if you are ever disappointed in your experience at Capone’s. We’ll do what we can to make you happy. If you have suggestions for our dinner show, be sure to fill out our online “Ask Al” form. We appreciate your comments and suggestions. We’re looking forward to 2021 and building another busy year despite dealing with a global pandemic. We want to have another year of being YOUR choice for an award-winning experience!

Congratulations to Capone’s and their staff and thank you to all of our guests who have sent in a favorable review to TripAdvisor. Job well done!

“Happy Days are Here Again!” This song resonated with the repeal of prohibition many decades ago. Fast forward to 2020 and the same can be sung again, despite a world pandemic.

Al’s gang is bootlegging again! We are opening our speakeasy on a limited basis. We’re taking many precautions (read them here) and want our guests and staff to feel safe.

As businesses re-open, let’s get happy. It means we can go back to work. Get out of the house? Yes! It means we are learning how to protect ourselves. We’re able to celebrate socially, albeit at a safe distance. We are winning!

We can all use a good laugh and a great meal prepared by someone else (Mama Capone). Take all of the precautions we’ve been advised of to heart. Then join our gang in celebration. Let’s get back to happy days! 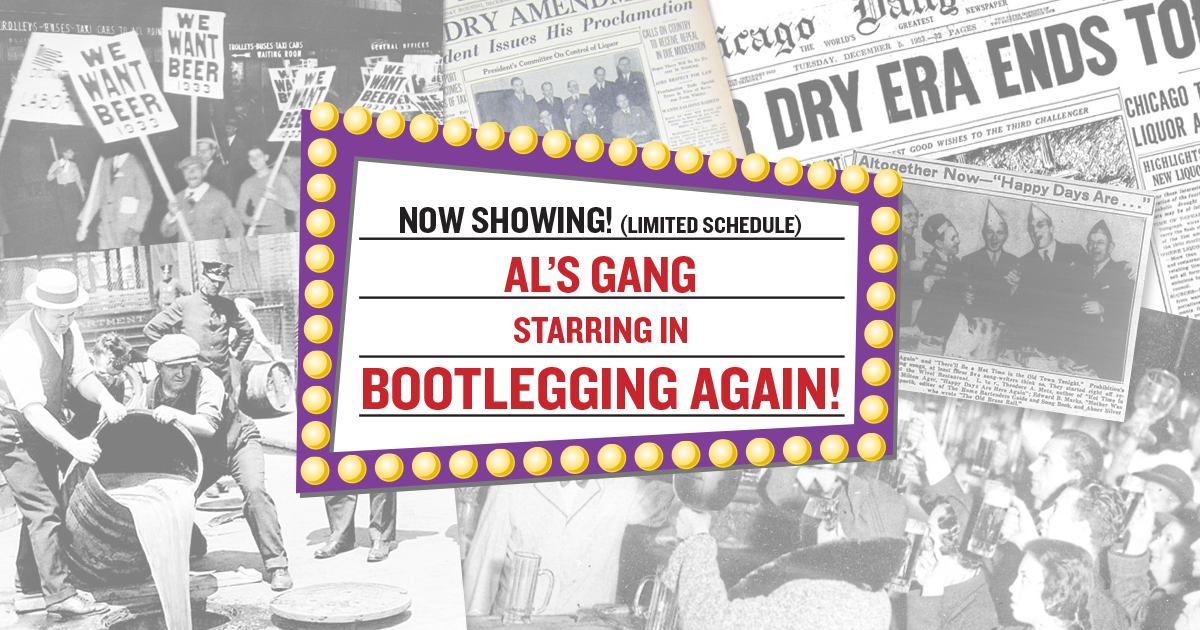 Due to the recent surge of COVID-19 cases, we have made the decision to re-open with a limited schedule at this time. We will be monitoring the situation and determining the best schedule going forward. Thank you for your understanding. If you have questions, please call the box office at 407-397-2378. Stay safe everyone!

It’s time to get this party re-started! Capone’s Dinner Show will be re-opening Saturday, July 25, 2020. We had to shut the party down just as we were getting into our 28th Anniversary Celebration. Well, no more! We’re re-opening better than ever. 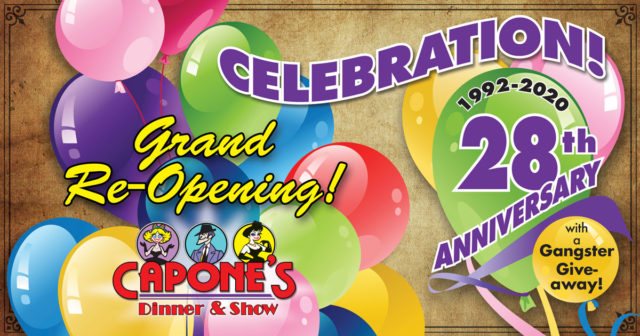 On July 25th, our first nightly show will take place at 8:00 p.m. Our online ticket system is taking reservations now. Our box office is also open receiving reservations by phone – call 407-397-2378. We will continue to feature only one show per night on a limited schedule, providing our staff plenty of time to sanitize our beautiful theater. Once the summer season is over (August 25), our showtime will be at 7:30 p.m.

Welcome Back to Our Joint

Our gang cannot wait to welcome you back. Join us in celebrating our re-opening and our 28th anniversary. The party will resume and the gangster giveaway prizes will be better than ever. There will be slight modifications to the show, but nothing to ‘snap a cap’ out. As Al would say, “ [COVID-19] has made nothing but trouble.” Let’s get back to having a blast like we did in the past!

Al’s a generous guy. He’s still offering tickets at 50% Off. Get the coupon.

Orlando area dinner shows remain closed due to the Coronavirus pandemic. Theaters sit empty. Employees have either been laid off or furloughed. Performers, servers and guest service staff wait eagerly for the return of laughter, cheers, action and guest interaction. How will that look when our beloved dinner shows reopen? Nobody is for certain until there is a vaccination for Covid-19, but here are a few things the wise guys at Capone’s Dinner & Show anticipate.

Prior to the State mandate to shut down mid-March, buffet service at Capone’s had already adapted to a new way of doing things. Instead of guests helping themselves at the buffet, employees assisted guests by dishing out their selections for them. This prevented multiple people from handling utensils. No doubt, traditional buffet service is a thing of the past until a solution for Covid-19 is available to the public. 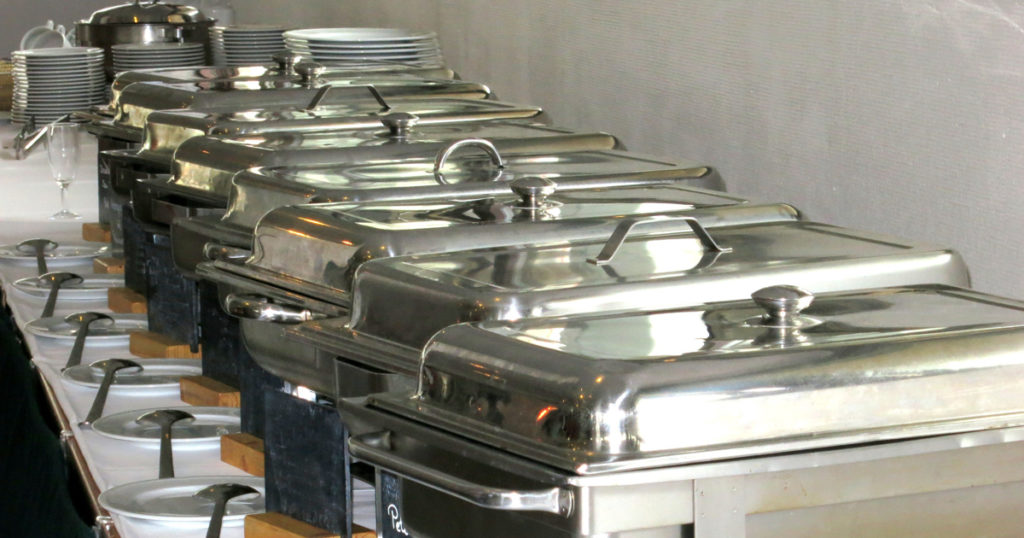 No doubt, buffet service will change for all Orlando area dinner shows and restaurants until a vaccine is available.

We also anticipate guests being spread further apart when shows are able to resume. This will be welcomed by some guests who like to distance themselves from other parties. However, those that enjoyed interacting with others next to them or across the table may have to wait for that feature to return. Nevertheless, Capone’s is prepared to meet the capacity standards regardless of the limitations set upon reopening.

Guests on stage? We think so! Dance routines may change slightly, but a little Charleston performed 6 feet apart is still entertaining. Guest interaction is still very doable. Our children’s interviews are very popular, and we see no issues continuing with a social distancing segment in the show.

While some other restaurants in Central Florida have adapted with unique services, Orlando area dinner shows will have to wait a little while longer. There is no take-out, no outdoor seating and very little we can do right now other than sell gift cards and wait. We’ve done our part to help stop the spread of the virus, and we’ll continue to protect our guests in the future.

Who knows, this “bug” may see some jitterbug from the wise guys and gals very soon. Until then, wash your ‘flippers’ often, stay home if you’re sick, and know that Al’s gang wishes you well and hopes things are ‘hitting on all eight’ at your joint.