A new ‘Disney dinner show’ is temporarily available at the Animal Kingdom. While the show is not new, the dinner offer is. Signature dining packages are available now through November 21 for Disney’s ‘Festival of the Lion King’ show at the Animal Kingdom theme park. For Lion King and Disney lovers, this is something to roar about.

The Festival of the Lion King show has been offered at this Orlando theme park since it opened 20+ years ago. It includes live performances with singing, dancing, gymnastics, fire twirling and an aerial act. If you love the classic film, “The Lion King” from 1994, chances are you’ll love this Disney dinner show as well. The Broadway-style show is filled with pageantry, puppetry, and popular songs from the film. 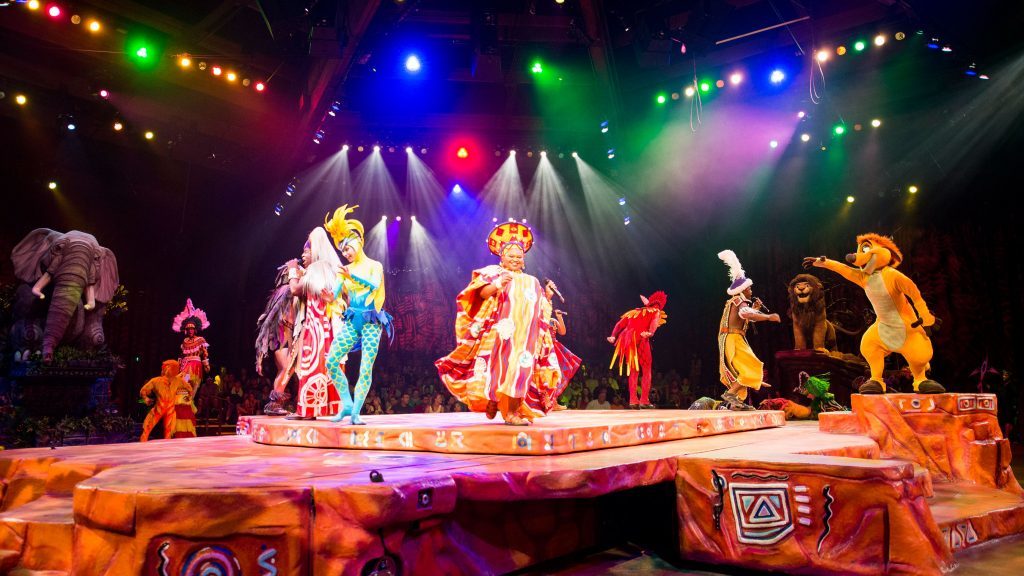 Additionally, the dinner package offers two tiers. Both include a meal at Tiffins Restaurant, VIP seating during the show, and a commemorative cast photo. Tier I packages also include a safari tour through the park’s African outback. The tour is lead by a dedicated guide after the show concludes. This Disney dinner show costs $99 for adults and $49 for children 3-9 years old. The less expensive Tier II package does not include the safari, but does include VIP seating and the photo. It costs $74 for adults and $29 for children. This is, of course, in addition to the theme park entrance ticket.

The Disney dinner show includes your choice of lunch or dinner at Tiffins. You’ll receive vouchers for the Festival of the Lion King show at Tiffins regardless if you are seeing the show before or after dining. This restaurant is located in the Discovery Island portion of the theme park, right before entering Pandora –  the World of Avatar. You will enjoy a 3-course meal consisting of one appetizer, one entree, and one dessert. You also have the choice of beer, wine or a non-alcoholic drink. Unlike Capone’s Dinner & Show, refills on the alcohol are limited. Sorry lion, Al is the king of that ‘jungle’ offering the most beverage choices of any Orlando dinner show WITH free refills!

Disney has many great restaurants. They also offer a dining plan which many people purchase along with their tickets. If you are on the Disney dining plan, you can exchange two table service entitlements for the Tier II package for this Disney dinner show.

It is uncertain if this Disney dinner show package will be offered after November 21. One thing is for certain, with world-class entertainment and food, space will be limited. Book your experience in advance! Make reservations online at the Walt Disney World Resort website or by calling (407) WDW-DINE (407-939-3463). Have a roaring good time!

Speaking of roaring… If you’d like to participate in a show who’s time period is set near the roaring ‘20s, check out Capone’s Dinner & Show. Tickets are all-inclusive and half price using this special link.

New theme park restaurants are opening nearly every month, and the new eateries and shops at Disney’s Animal Kingdom are worth checking out. From chain restaurants to unique sweet shops, you’ll find familiarity as well as never-before-experienced menus.  One thing is for sure, an animal appetite is sure to be tamed!

On the familiar side of new theme park restaurants in Animal Kingdom is the Seattle-based company of Starbucks. This new chain restaurant opened in April and is now represented in all four Walt Disney World theme parks and two additional locations in Downtown Disney. (Starbucks are also located within Universal Orlando’s Islands of Adventure and Universal CityWalk). The Animal Kingdom Starbucks is located outside of the entrance to “Africa” on the west side of the Orlando theme park. You’ll find it as you approach the iconic Tree of Life, just before the bridge. 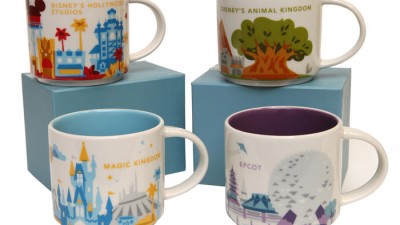 Starbucks offers a unique souvenir at this store. The Disney “You Are Here” mugs come decorated according to the park you are in. The Animal Kingdom mug shows the Tree of Life, Expedition Everest, a jeep (Kilimanjaro Safaris) and a giraffe. They make great souvenirs. 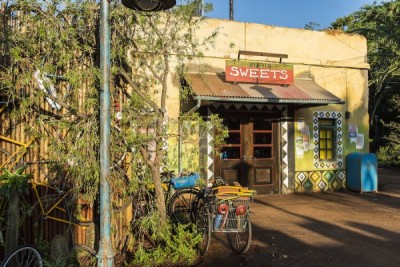 In the Harambe Market within Disney’s Animal Kingdom, a new dessert shop recently opened called Zuri’s Sweet Shop. At this new theme park restaurant you’ll find dozens of never-before-experienced treats. In fact, the menu is raising all kinds of “stink.” Let me explain…

Editor’s Note: After only a few weeks Disney has announced that the poo desserts will no longer be offered. After testing (and maybe the publicity?), they will no longer restock these items.

Along with candy apples, chocolate bars, African-spiced popcorn, animal-shaped lollipops and 80 other new items, Zuri’s is now selling animal poop! Inspired by dropping of the large game animals of Africa, the chefs at Zuri’s decided to have fun and create desserts you won’t turn up your nose at. Four types of poo are offered at $3.99 per serving (enough for two people). Choose from giraffe, rhino/hippo, elephant and cotton-top tamarin. You’ll have fun just picking out the dessert, because you have to match the “poo” with the species! Ingredients include:

The theme park shop is an experience all in itself. All of the sights, sounds and flavors of Africa can be experienced here. Be sure to try the African Spice popcorn. With just a hint of cardamom, it is very addictive. You might need to purchase an extra bag for later. 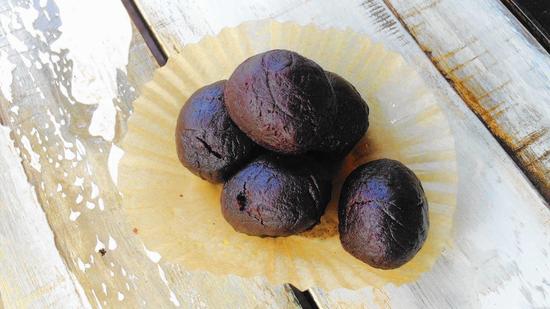 In addition to the new restaurants, Disney has also started incorporating allergy-friendly menus within their theme parks. The menus have been tested for common food allergies and intolerances. So far, over a dozen locations have adopted the menu. Disney’s Animal Kingdom Lodge is one of the newest locations to offer one. If you or your child have a special dietary need, consult with a Cast Member. They can assist you or consult with a chef about your needs.

If you’ve not experienced Disney’s Animal Kingdom recently, check it out. The Tree of Life’s roots have expanded and include new animal carvings. The 145-foot tall by 50 fee wide structure has more than 103,000 leaves and over 300 meticulously detailed animal carvings in its trunk and roots! Inside the tree is a theater where “It’s Tough to be a Bug!” is performed. There are dozens of places to grab a bite and a couple of very nice full-service restaurants.

Like all Disney theme parks, there is plenty to do and see. Now there is even more to taste. A full day is sure to leave you “pooped” and with a bag to take home as well!

With many attractions available in the Disney World areas, any Orlando attraction vacation planning should be done before arrival. Planning includes reviewing different attractions to discover what each Orlando theme park offers. Visiting Animal Kingdom theme park is a must. Though, designed for younger children, the older children enjoy it too, as well as any animal enthusiast. Riding through the Kilimanjaro Safari to see wild animals is thrilling.

Viewing the animals first thing in the morning is best. Visits during cooler weather will make it possible to spot animals. The animals, becoming hotter throughout the day, will start looking for shadier areas; making them less visible.

Since viewing is easier in the mornings, it only makes since for each day at Disney World would begin here also. If you want to have Goofy, Pluto and Minnie greet you for the day; they will meet you in the Tree of Life area. Just walk through the turnstiles to the tree, and every morning, 15 minutes before the parks scheduled opening time, this will happen. Afterwards, Mickey will be seen getting on the truck allowing everyone there to follow him into the Orlando attraction.

A must-see show, which is located inside the Animal Kingdom theme park, is Finding Nemo – The Musical. Creating a musical event for the parks from a non-musical movie made this addition another first for Disneyland. This Orlando attraction immensely engages audience members; taking them back to a movie that is performed by the singing characters guests know and love. Through the use of dancers, acrobats, puppets and animated backdrops, giant Nemo, Dory and Marlin share the story about their trip to Sydney and back in order to save Nemos’ dad.

Another musical, based on an original Disney animation, is Festival of the Lion King, based on The Lion King. This show is a favorite, must-see, among all ages. An air-conditioned, octagonal theatre sets the scene that allows you to become immersed in the show. The enthusiastic performers, adorned in beautiful pageant style costumes, are able to take you into their world, forgetting all your troubles; at least for the 28 minutes the show lasts. The classic story is performed with acrobatic production while each song, made famous from the movie, and the costumes become more colorful as the scenes change. The less waiting timed shows are early morning and in the evening. Scheduling your Disney World trip can have you waiting less time in lines.

Start your magical vacation in the beautiful Orlando attraction, Animal Kingdom. Remember, Capone’s Dinner & Show is just minutes away from this Orlando theme park. So after your visit with the animals, join Al and the gang for dinner. It’s fun for the entire family!