If you enjoy watching chefs, food contests, discovering restaurants, and just about anything food-related, chances are you’ve tuned into the Food Network a time or two while watching television. On Wednesday and Thursday of this week, you have the opportunity to see one of our very own Orlando dinner shows being featured. Pirate Dinner Adventure will be one of the restaurants included in the series called “Craziest Restaurants in America.”

This particular show is titled “Big, Bigger, Biggest.”  Where will this dinner adventure fit in? The only clue given is that the episode will cover restaurants “from a 15,000 square foot saloon in a cave, to an eatery where amazing high flying divers make a splash.” Since the Pirate Dinner Adventure features a ship and audience participation, it doesn’t sound like the “craziest” location that will be aired in this show.

Other episodes within the series have focused on “Eat at Your Own Risk” which covered restaurants such as the Catfish Plantation, a 120-year-old Victorian house said to be haunted; Joanies Blue Crab Cafe in the Everglades, surrounded by alligators; and Heart Attack Grill where you can order the Octuple Bypass Burger (see photo below). In another episode called “Too Hot to Handle” cuisine such as the triple hot wings, guests can ring a bell to be rescued with milk, vanilla ice cream or other soothing remedies. Other upcoming series are titled “Weird, Weirder, Weirdest,” “No Passport Required,” and “Off the Eatin’ Path.” 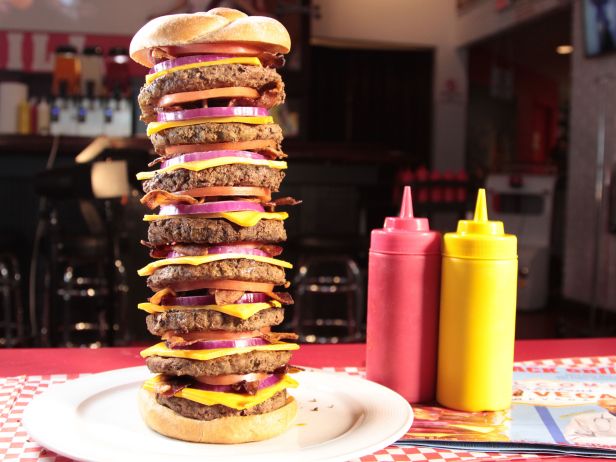 The Heart Attack Grill in Las Vegas offers the Octuple Bypass Burger. Eat at your own risk!

Chef Graham Elliot is the host of the show and features restaurants all over the U.S. He finds the most-unique, most-outrageous, most-outstanding and even the most-bizarre food establishments that dish out delicious meals and memorable dining experiences. Of course, not all restaurants are as crazy as an underwater cafe or a zombie-themed bistro, however, most of these restaurants leave their customers saying, “Wow!”

Tune in on Wednesday, June 17 at 10:00 p.m. or on Thursday, June 18 at 1:00 a.m. to watch the “Big, Bigger, Biggest” episode when Orlando’s Pirate Dinner Adventure will be included in the list. If you want to see it in person, this dinner show is located at 6400 Carrier Dr, Orlando, FL 32819. If you enjoy a smaller venue that features a crazy cast of characters, “tune in to” Capone’s Dinner & Show which features a great menu and show every night of the year just south of Orlando in Kissimmee.