By Carla Sinclair-Wells on August 2, 2016 in Orlando Dinner Shows

Orlando’s dinner show talent is extremely gifted. We are definitely not lacking in performers with a lot to offer. With bigger entertainment venues all around Central Florida, dinner theater has a wide selection of talent to pull from. It also helps attract performers from all over the world.

It isn’t uncommon for one of the characters or performers of a dinner show to also work as a performer at a theme park. Additionally, the performing arts in Orlando offer a great resource of talent. Because it can be difficult to make a living from one show or attraction, dinner show talent often split their schedules amongst various venues. Every once-in-a-while a local performer receives such acclaim they find an even bigger stage. 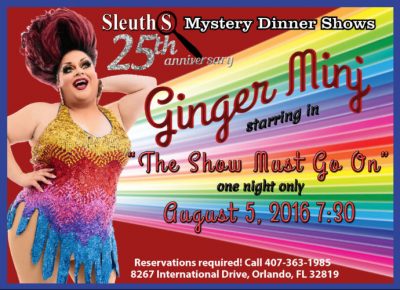 Take for instance Orlando drag queen Ginger Minj. This talented performer, Joshua Eads-Brown, grew up in Leesburg and has performed in many shows. While most dinner show talent doesn’t find itself in the national spotlight, Ginger Minj has. “RuPaul’s Drag Race” is a reality show on Bravo. The show features 14 contestants vying for the title of “America’s Next Drag Superstar.” Minj was a runner-up for the seventh season, finishing behind winner Violet Chachki.

Minj has also performed her one-woman show in New York titled, “Crossdresser for Christ — The Musical.” She has also shot a music video and traveled to several other countries. Now this dinner show talent returns to Orlando with an appearance on Friday, August 5 at Sleuths Mystery Dinner Theater. At this show, Eads will appear as the character of Madeline in “The Show Must Go On.” This is one of 13 rotating mysteries featured at Sleuths. For more information about this special appearance, call 407-363-1985 or go to sleuths.com. 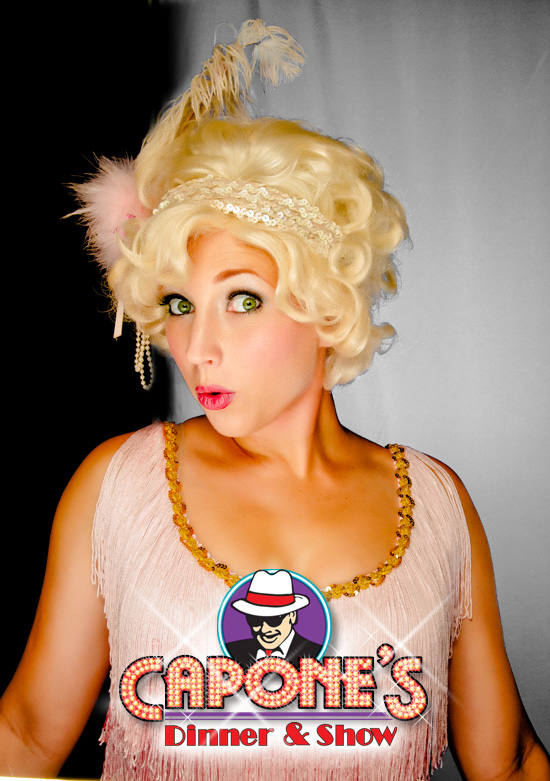 A majority of the performers at Capone’s Dinner & Show have had their fair share of success. Not only is the dinner show talent successful, the staff is as well. It isn’t uncommon for guests to return year after year only to have the same exceptional wait staff!

Not only are the actors talented, they have a special talent. The show at Capone’s features some of the best standup comedy you’ll ever experience. To interact with some audiences takes a gift like none other! From the loud boisterous guest to the shyest young child, the performers read the guest and interact in true gangster fashion.