Al and the gang wish to congratulate Diane Boudreau for being July’s Grand Prize winner at Capone’s Dinner & Show Sunday, July 25th. During our “25 Years of Memories” anniversary celebration we’ll be giving some lucky stiff a grand prize on the 25th day of each month. Next month it could be you! The next grand prize will be awarded on Friday, August 25, 2017.

Diane, a.k.a. Mammo (now that she is one of Al’s gals) came all the way from Boston just to see the show! Imagine that. What a dedicated dame! We’re fairly sure Mammo has some connections from the Boston syndicate. While her winning is a little hinky, Al assures us it was all above board. He should know. Nothin’ goes on in his joint without full disclosure.

Yous sees, the night of Mammo’s visit, lady luck was on her side. The wise guys asked this random broad to pull the winning ticket. She pulled her very own number! What are the odds? Well, one in several hundred. Better than odds at pickin’ 6 numbers, but still very unusual. With this being Mammo’s first visit to our speakeasy, we know she didn’t have connections to set up a sting. So here’s to a square winner! 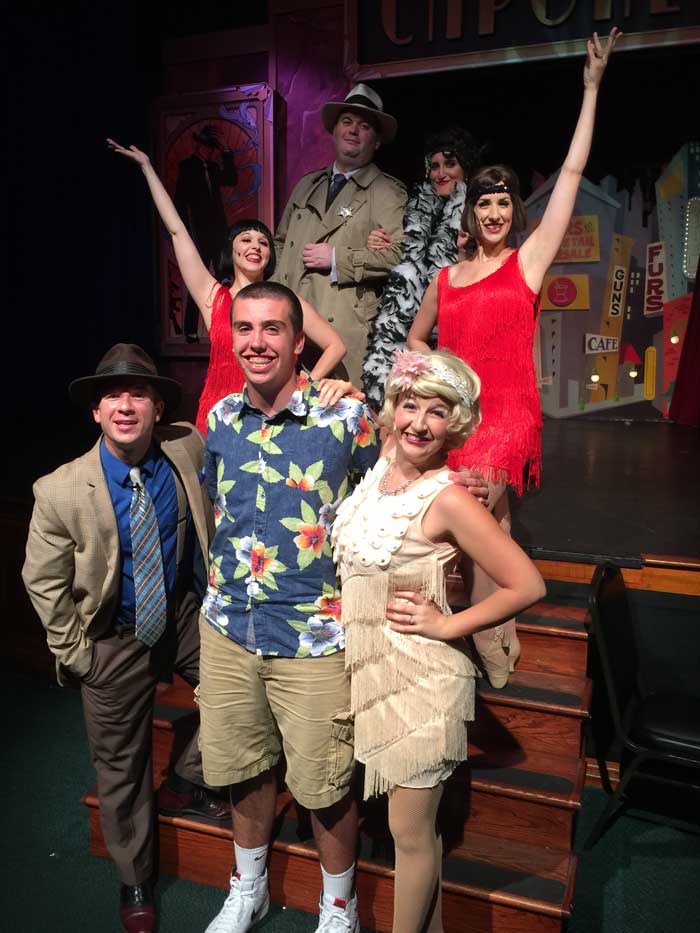 “Mammo” was the big winner of July’s anniversary prize, but this ain’t her. Seems she is the shy type and put her son up to take the fall, er a, used him in the evidence photo.

Mammo’s favorite part of the evening was the great servers and cast. It’s hard not to fall in love with our goons and gals. It doesn’t take a pushover to appreciate their hard work. Servin’ drinks, takin’ shots from plugs, all while being a vital part of our new show. We also think our guests are the bee’s knees. They take good care of our gang, and we’re happy to welcome them into ‘the family.’

The least favorite part of Mammo’s experience was “nothing.” Her words exactly. Our chopper squad didn’t get near her & there were no promises of cement shoes – we swear! With great food and a great show, at a great price…what’s not to like? If you need more reasons to love us, read our countdown list. Capone’s Dinner & Show remains the best value of any Orlando dinner show.

Mammo’s prize was a pair and a half Cs in her pocket, plus a C note to spend in our very own gift shop. Hold on though, that’s not all. She also received 4 tickets to Capone’s Dinner & Show! We’re fairly certain some new clothes and shoes are headed for Mammo’s closet. She’ll probably drop a dime on her husband too. Afterall, he is the one that informed her of our joint. Hopefully, Boston is ready for this swanky kitten! Of course with tickets to our show, her mob will always be welcomed back. We love our repeat offenders.

Again, we’d like to congratulate July’s grand prize winner, Diane Boudreau. Capone’s Dinner & Show hopes that the evening’s experience was the cat’s meow and will be a great memory for years to come.