By Carla Sinclair-Wells on August 13, 2012 in Orlando Dinner Shows 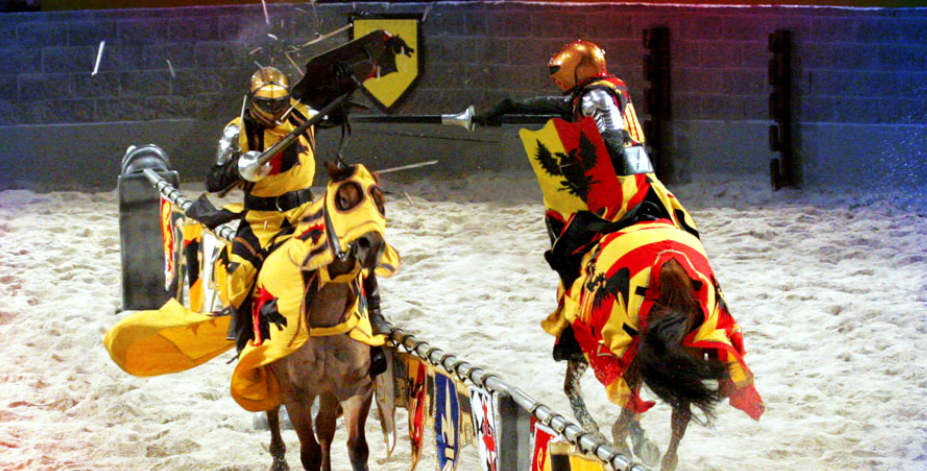 Pirates Dinner Adventure of Orlando got a big “shiver me timbers” last week as Medieval Times Dinner and Tournament filed a lawsuit alleging that Pirates stole the concept for their new show from Medieval Times. The new show in question is called “Camelot Knights Dinner Adventure” and features similarities you might expect. What Pirates did not expect was this lawsuit which seeks lawyers fees, damages and a court order to end the show.

Similarities between the shows include the plot, the costumes, as well as menu items. They also claim the phrase used to promote the show, “a night to remember” was taken from Medieval Times’ phrase “a knight to remember.” It is also alleged that a former employee went to work for Pirates after being employed by Medieval Times and this could greatly impact the lawsuit, especially if it can be proven that this worker was hired as part of a plan to copy the show.

The new show “Camelot Knights Dinner Adventure” has received extremely poor reviews on yelp.com and multiple blogs that have posted stories about it. Most folks primarily wonder why Pirates would even attempt a theme more to the liking of Medieval Times Dinner & Tournament (or Arabian Nights Dinner Attraction for that matter).  Mentioned quite often is the wish that Pirates would stick to what they know best, and that is entertaining guests with a pirate-themed show. It makes me wonder if the show, “Treasure Tavern,” introduced in the Pirate’s Dinner Adventure entertainment complex in June 2010 (for adults only), has had similar reviews?

The contest between Orlando dinner shows has been ongoing for many years, but this is the first lawsuit filed between them (that I know of). With so many tourists visiting the area, the battle to lure as many guests to a particular dinner show will continue long after this lawsuit is decided upon. It may, however, alter how new shows at existing dinner show theaters are introduced.

Even now, as Capone’s Dinner & Show is in full preparation of their new show, you can bet it will focus on what they do best and NOT include a Camelot-themed horse and pony show! Marking their 20th year in Orlando, Capone’s will stick to a well-received, very successful and original, gangland Chicago-themed dinner show. Capone’s is not a franchise. There is only one of its kind, and it is right here in Orlando! Other Orlando dinner shows could learn a thing or two about originality. Not copy an existing show? Well blow me down!