By Carla Sinclair-Wells on February 20, 2012 in Festivals & Special Events, Worth the Drive 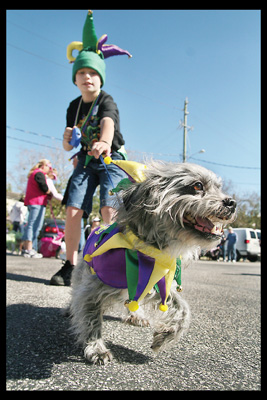 Fat Tuesday offers celebrations all over Central Florida and can be a fun time to get out with friends on a week night. Many vacationers and locals will flock to the normal venues of Universal, SeaWorld, Downtown Orlando and Disney, but this Tuesday, you may want to consider visiting the quaint town of New Smyrna Beach (NSB) for their Mardi Gras parade and street celebration.

It’s not the big fanfare you expect from the ‘big boys’ in the region, but a small-town parade is often what many vacationers would treasure should they happen to stumble upon it. NSB’s parade is all of about 7 blocks long down beach side’s Flagler Avenue. The parade starts at 7:00 p.m. and consists of a string of residents on floats, golf carts, antique cars, Segways, motorcycles and on foot; throwing out candy, beads and showing off some crazy outfits. When Mardi Gras coincides with Race Week, the famous Budweiser Clydesdale Horses have been known to make an appearance.

The fact that many don’t think of New Smyrna Beach to celebrate Mardi Gras is exactly why you’ll be glad you did. It’s not overly crowded, it’s fun, it’s real, it’s inexpensive, small-town America. People are friendly and downright neighborly. There many wonderful restaurants to dine at before the parade, plenty of bars to party at after the parade, and hotels and B&B’s to stay at overnight.  Just come early and expect to walk a few blocks due to the lack of parking. Flagler Avenue is blocked off starting at 5:00 p.m. to accommodate the parade. Parking is a major issue, especially now that they have added parking meters in many of their public parking lots.

Spend Fat Tuesday in NSB and be sure to catch some beads and a piece of small town charm. Wednesday will be here soon enough and you can go back to the crowds, standing in line and fighting the traffic.