There are numerous museums in Central Florida. Some are within a short driving distance from the attractions making it fairly easy to visit during a family vacation. However, next spring a new museum is coming to Orlando right in the heart of the tourist corridor.

Skeletons: A Museum of Osteology will open at the I-Drive 360 complex next spring. This attraction will feature animal and human skeletons. Taking up 7,750 square feet of space, that is a lot of bones! In fact, more than 300 sets of bones will be displayed in dioramas and interactive exhibits. 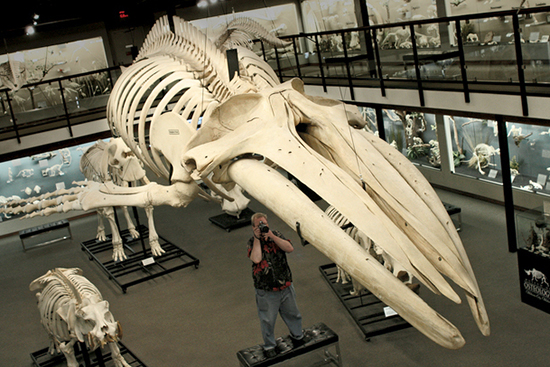 The museum owner (Jay Villemarette) already has an osteology museum located in Oklahoma City as well as a specimen business, Skulls Unlimited International Inc.  The skeletons in the Oklahoma museum are arranged in scientific poses. Son and marketing director, Josh Villemarette, wants to set up the Orlando museum to reflect more of an entertaining, family-fun attraction, so there will be more action poses. There will also feature interactive exhibits in which guests will be allowed to touch the skeletons.

The new museum will have about eight human skeletons with the rest being made up of various birds, mammels and other animals. Various zoos often provide the animal skeletons in hopes of educating guests about the animals they help protect and care for. As for the human skeletons… any volunteers? They do accept specimens as donations!

Skeletons: A Museum of Osteology is expected to be about an hour and a half walk-through experience. Tickets will be sold at $19.99 for adults and $12.99 for ages 4 to 11. It will be open every day, year-round.

Another museum, Madame Tussauds Wax Museum is also expected to be housed in the I-Drive 360 complex. The site also has plans for a Sea Life aquarium, numerous shops and restaurants. Some are already open for business. With the Orlando Eye (a 400-foot tall observation wheel) expected to open in 2015 and the Skyplex in 2016, this new attraction area is really starting to shape up, up, up! No bones about it.