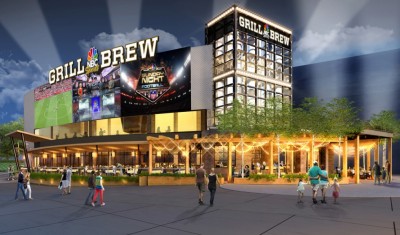 The NBC Sports network will open their first-ever new restaurant, NBC Sports Grill & Brew, this Fall at Universal Orlando’s CityWalk. When the NASCAR Grille closed, we knew something special would take its place, and boy is it going to be special! It will definitely appeal to not only NASCAR fans but fans of all sports (shown on NBC of course).

The new restaurant will be one of the largest sport-driven restaurants around! NBC Sports Grill & Brew will feature 90 big-screen televisions. Even people walking by will enjoy the huge screens located on the exterior of the building. A massive high definition stadium screen (more than 100-feet wide) will tower over guests as they enter the restaurant. There won’t be a seat in the house that cannot enjoy the sports on screen.

Do you like beer? There will be 100 different beers to choose from. The new theme park restaurant will also have an outdoor beer garden. What a great atmosphere for football season! Even NBC Sports anchors Liam McHugh, Mike Milbury and Keith Jones think so. Check out this video featuring the sports personalities:

An open kitchen will be located inside where you can watch chefs prepare your meal. Custom open fire grills will cook up your burgers and steaks. Other not so ordinary dishes, such as crab scotch eggs, will be on the menu. More information about the food, menu and entree prices will be announced as the opening gets nearer this Fall.

With so many new restaurants opening at CityWalk there is definitely something for every taste and budget. This new restaurant will fit in nicely. If you haven’t been to CityWalk lately, here is a list of newly opened or remodeled places to eat:

Many standby favorites that remain at CityWalk include:

If you are looking for a quick bite after leaving the theme parks, a romantic dinner for two, a late night snack or taking the family out for a feast, you’re sure to find a restaurant at CityWalk for that occasion. This Fall you’ll have yet another choice – perfect for you if you are a sports fanatic. If you are looking to sit and relax at a dinner and show, Capone’s Dinner & Show is just down the road located at 4740 W. Irlo Bronson Memorial Parkway (Highway 192) in Kissimmee, FL 34746. Only a 1/2 mile east of the S.R. 535 and 192 intersection.

Even Al and the mobsters at Capone’s like to swing a bat every now and then. Baseball season will be over by the time the NBC Sports Grill & Brew opens, but there will be plenty more action to look forward to. Speaking of action, until the new theme park restaurant is open, bring your team on into Al’s joint and catch a “bullet” during the action-packed gangster shoot out. No baseball glove required. It’s a blast!