By Carla Sinclair-Wells on September 19, 2014 in Orlando Dinner Shows

Aaaarrrr ye feelin’ like talkin’ like a pirate? If so, you can join in on a fun yearly international event. September 19 is “Talk Like a Pirate Day.”

It is a fun-filled day with maties carrrrry-ing on. After 13 years, this non-traditional celebration has grown into an international phenomenon. A certain Orlando dinner show be celebratin’ all week long. You guessed it – I’m talking Pirates Town. They’re sailin’ the ship for all it’s gold with specials and deeply discounted tickets. Other venues offering special contests on September 19 include the Gnarly Barley (7431 S Orange Ave., Orlando, FL 32809) and The Yacht Club (1700 Epcot Resorts Blvd., Orlando, FL 32830).

With not one, but four shows at this complex, pirate fans are crrrrrawling all over the place! Pirates Town hosts four Orlando dinner shows: Pirate’s Dinner Adventure, Treasure Tavern, , Cirque Magique. The shows are held within the dinner show complex located just off International Drive in Orlando at 6400 Carrier Drive.

Pirate’s Dinner Adventure is performed in the main theater and has enjoyed success for 18 years in Orlando. The theater can hold as many as 850 pirate-lovers seated in ships which surround an 18th-century Spanish galleon replica where the show takes place. It’s a swashbuckling adventure filled with cannon blasts, fireworks, singers and stunt performers. “Rise of the Sea Dragons” is the title of their newest show, so expect the 300,000-gallon indoor lagoon to provide some of the action in the performances.

Treasure Tavern opened in July 2010 and is faring well. It is an Orlando dinner show that caters to adults only, unlike so many of the Orlando attractions which strive to be kid-friendly. If you are easily offended, however, this may not be the show for you (it is a burlesque tavern). This portion of the Pirates Town venue is a small restaurant-type setting (although you might be seated at tables with other guests) and the meal is served by the dancers throughout the two and a half hour show.

Cirque Magique is the newest show to be added to Pirates Town. Like the 3 Musketeers, it too is a short production lasting a little over an hour. The target audience for this show is children. It is fast-paced with a lot of juggling, circus acts (without animals, except dogs), audience participation and magic. 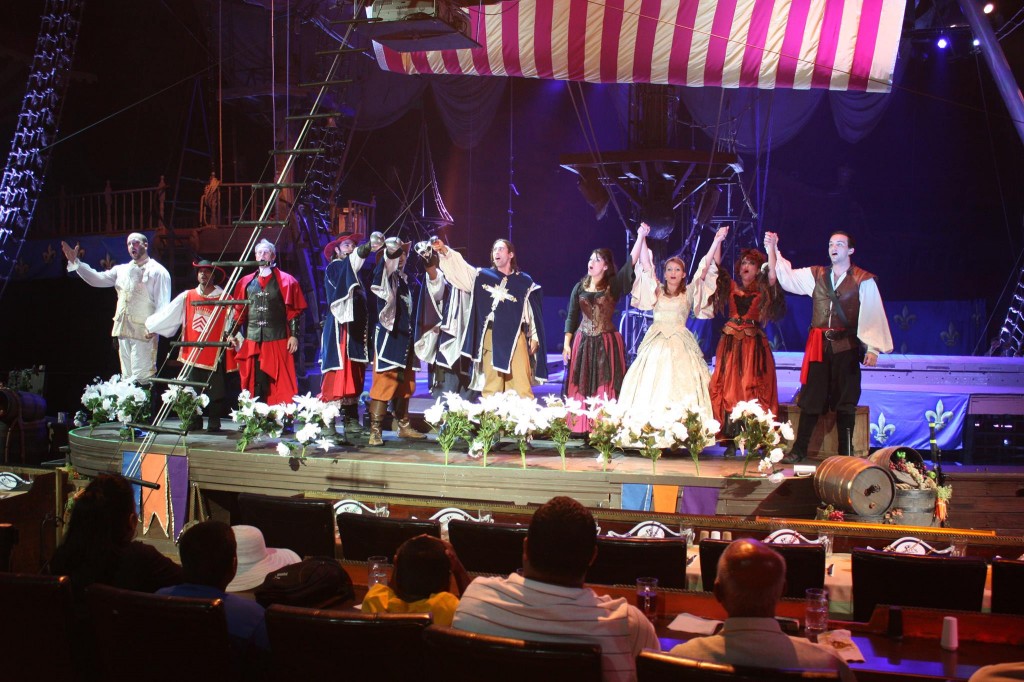 If you can’t make it to Pirates Town on Talk Like a Pirate Day, aye, never fear ye lubbers. Pirate’s Dinner Adventure is performed each night of the week. Treasure Tavern is open Tuesday through Saturday. The 3 Musketeers and Cirque Magique is performed every Friday and Saturday, as well as a Sunday matinee.

Arrr, beware my hearties, as with many Orlando dinner shows, the reviews are not always favorable. Some guests, of course, do not enjoy the show or the meal, but “All for one, and one for all!” as we all know, is not the motto with all Orlando dinner show guests. The top three complaints about the shows held at Pirates Town are (as read on Trip Advisor):

If you enjoy talking like a pirate, you might enjoy talking like a mobster day, which is every day at Capone’s Dinner & Show! Their online 20’s slang dictionary is a blast to read through. If there is ever an official “Talk Like a Mobster Day,”  this Orlando dinner show will definitely be the go-to place. Regardless if you talk like a mobster or pirate, you’ll enjoy experiencing this one-of-a-kind show! There is no charge for parking, groups under 10 do not have their gratuity added automatically, and you’ll have over 15 beverage choices. Even alcoholic drinks are included in the ticket price!!

Now if I can just switch my language preference on Facebook back to English from Pirate, I can stop annoying my winches and scabbard friends!