Disney Springs is located up the road from Capone’s Dinner & Show. Your ticket to this Orlando dinner show includes dessert, however, if you still want something sweet after the show is over, now you know where to get a great cupcake! Save some frosting for the wise guys!

About the Sprinkles Cupcake ATM

Each machine holds approximately 400 cupcakes and are ‘open’ 24-hours a day. They are restocked by the bakery several times a day, as well as prior to the bakery closing each night. Rarely will the machine run out, but hey, you never know! With Disney Springs more than doubling its size and more and more shopping and dining venues being added, a late night dessert purchase will be very popular. See the complete guide to Disney Springs to see what other retailers are located at this popular Central Florida attraction. 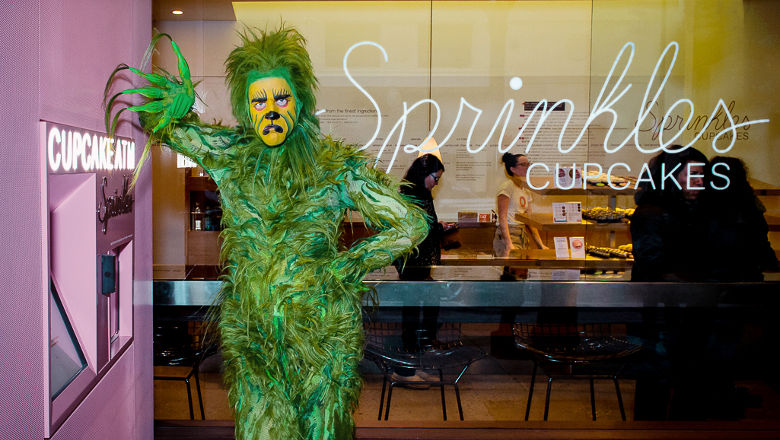 The Sprinkles Cupcake ATM offers several choices of cupcakes, including vegan, gluten free and sugar free cupcakes. The ATMs at other locations even offer doggie cupcakes! A few of the most popular flavor concoctions are salted oatmeal cornflake cupcakes and other flavors such as banana peanut butter, maple bacon, Cuban coffee and lemon coconut.

Cupcakes cost around $4.25 each. The ATM only accepts credit and debit cards. No cash is ever dispensed. Once you’ve picked out your flavor and paid, a robotic arm packages the cupcake and boxes it up to keep the frosting safe. Out comes a perfectly frosted, fresh cupcake in a box!

The Sprinkles Cupcake ATM will make it very easy to satisfy your sweet tooth while visiting Disney Springs. The hardest part will be deciding on which flavor to choose. Then again, who says you only have to purchase one?