By Carla Sinclair-Wells on June 4, 2015 in Orlando Tourism News

SeaWorld and Busch Gardens, Central Florida theme parks will add new roller coasters in 2016. If you love thrills, these additions will provide plenty. The new coaster coming to SeaWorld is called “Mako.” Busch Garden’s new thrill ride, “Cobra’s Curse” will also be opening in 2016, replacing the wooden coaster Gwazi which was closed earlier this year. With these new attractions, the wise guys and gals may be spending a lot of time at the tracks! 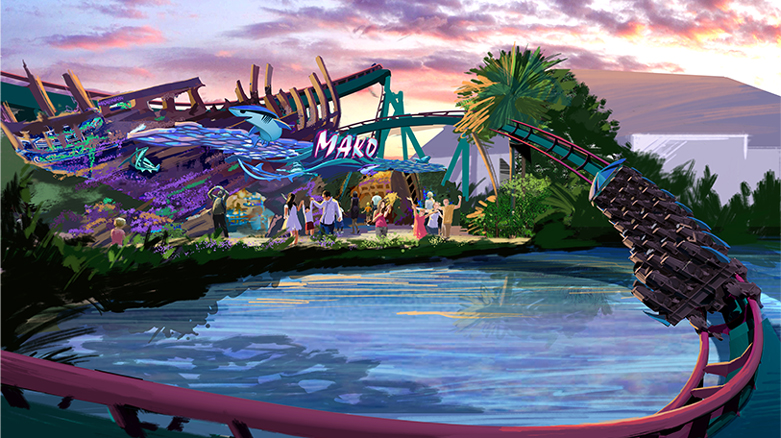 SeaWorld’s newest exhibit is all about sharks. The new coaster will join Shark Encounter and Sharks Underwater Grill in an effort to educate park guests about these apex predators. Since Mako sharks move with speed, agility and weightlessness, it makes perfect sense to name this thrill ride after such a thrilling creature.

Mako will be Orlando’s tallest and fastest roller coaster (until 2017 when Skyscraper is expected to open at 500 feet tall).* The all-new coaster will be 200 feet tall, reach speeds of 73 miles per hour and will cover 4,760 feet of track (nearly a mile) with 1,864 feet above water. It is classified as a Hypercoaster, known for not only speed, but also steep ups and downs which create “air time.” There will not be inverted twists or dangling legs, nor will there be shoulder restraints. You won’t need them. The ride will be more secure than many other coasters, which is a safe bet knowing the issues SeaWorld has had with their public opinion over the last few years.

Busch Garden’s all-new roller coaster is all about snakes. It will be added into the Egypt area of the theme park. It doesn’t try to thrill with speed and heights, but with vertical lifts, forward and backward motion and spins! Imagine spinning throughout the ride and coming face-to-face with an 80-foot snake. I’m hoping that is where the backward motion comes in!

Cobra’s Curse has a lower height minimum of 42 inches so more family members will be allowed to ride it.** Just because it won’t be the tallest coaster doesn’t mean that it won’t feel like you are way up there. The maximum height is 70 feet tall and the ride will reach speeds of 40 mph. Clearly, the speed is not what will thrill you, but the rest of the three-and-one-half minute ride over 2,100 feet of track is promised to be exciting and unforgettable. The queue line should slither through fairly fast, because the roller coaster will accommodate up to 1,000 riders an hour using eight sets of trains.

Other Roller Coasters at Busch Gardens include:

The fact that theme parks will add new roller coasters is just one more reason Central Florida is the place to come if you are seeking a thrilling vacation. Speaking of thrills, be sure to save a night for Capone’s Dinner & Show. The gangster shoot-out may not make you feel like a shark, or put you face-to-face with a snake, but it is a fun addition that brings a lot of excitement to the show.

*Currently SheiKra at Busch Gardens in Tampa clocks in at 70 mph with the Incredible Hulk Coaster at Universal’s Islands of Adventure a fast second at 67 mph. The tallest coaster is Universal Studios’ Hollywood Rip Ride Rockit at 167 feet. The longest Central Florida theme park coaster is Expedition Everest at Disney’s Animal Kingdom measuring 4,424 feet. Of course, there are faster, taller and longer coasters in other parts of the world.

**Disney’s Big Thunder Mountain Railroad has one of the lowest height minimums of 40 inches. Space Mountain and Expedition Everest have a 44-inch requirement. Journey to Atlantis (part water ride, part coaster) also has a 42-inch requirement.