Most of my guests are lookin’ for a fun time and audience interaction when they attend Capone’s Dinner Show. So’s that’s why havin’ palookas… I mean personable fellas, workin’ at my joint is so important. Yous sees all the dames, servers and wise guys at my speakeasy are special, but this month’s featured ‘goon’ is Bullitts. (Don’t ask me why he spells it that way, it’s just the way it is.) 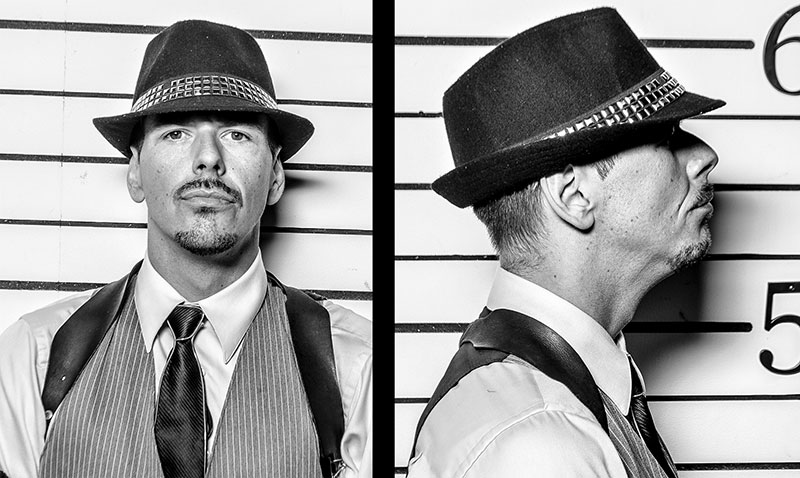 Bullitts made his way down from Pawtucket, RI several years ago. In February of 2004 he joined our gang and has been a loyal member of ‘the family’ ever since. Probably ‘cuz he needs the kale to feed his ever-growing family. Yous sees Bullitts has seven children – hince the name, Bullitts. Yous can believe we’ve heard him say, “no ‘shooting blanks’ jokes, folks” more often than we can count! Even at home, Bullitts has an audience, so it jus’ stands to reason why he’s so good at gettin’ a crowd involved. One thing’s for sure, all those mouths to feed keeps Bullitts on his toes and workin’ hard at my joint.

One of the things Bullitts likes best ‘bout working at this Kissimmee dinner show is the atmosphere. He loves interacting with guests and being a goofball. There’s nothin’ like a goofy gangster runnin’ ‘round makin’ people laugh. Speakin’ of runnin’ ‘round… There was a time Bullitts’ hands were full of glassware and his belt decided to break. Wow! What a show! Even with his pants fallin’ down – stopping the show in laughter – Bullitts didn’t skip a beat. What a pal!

At Capone’s Dinner & Show, one of our guests’ favorite part is the audience interaction. We can get everyone involved somehow. Even the kids. Then there are some people that jus’ love to heckle. If you’s one of ‘em, Bullitts can out-heckle the best of hecklers! I’d bet on it, if I were a gamblin’ man. Alternately, if you’d rather not get so involved, ask for a table farther away from the action when yous make your reservation. We understand not everyone loves being in the spotlight like Bullitts does. He likes it so much that he wishes we had more than one show a day! Yous know what? Some days we do have two shows! Visit our showtimes page and see when matinees, early shows and late shows take place. More than likely Bullitts will be here waitin’ on yous.

As it is (unfortunately), there are times our guests take the audience interaction a little too personal. Our wise guys are pretty quick to pick up on the high-hats that can’t take a joke. But seriously folks, if Bullitts can joke with a lady in a wheelchair tellin’ her he’s going to switch out her oxygen tank with laughing gas, then yous can lighten up too, capisce?! It’s not like we’re going to put yous in front of the chopper squad if yous smile a little. Forget-about-it…We’re here to have fun!

If you’d like to meet Bullitts, or any of my wise guys and gals here at Capone’s Dinner & Show, we’ve made it easy. Jus’ make your reservations online and get half price tickets! Come to our speakeasy an’ be part of the great audience interaction that Bullitts an’ the gang make happen every evening. Your entire family (including your 7 children) will enjoy the show and can play a part in the action. The laughter will do yous good, and the evening will be one for the history books.

While you’re a guest at Capone’s Dinner & Show, be sure to meet Bullitts. He’s here nearly every night of the year. When he’s not, well, you can only imagine what he’s doin’ at home. We love our family & invite you to be a part of it too! Join us one evening soon.