Early Bird Special and a Theater Performance Too!

Who doesn’t love an early bird special? It’s not just for retired folks. People of all ages are seeing the benefits of eating a little earlier and having time after eating for fun or relaxation. 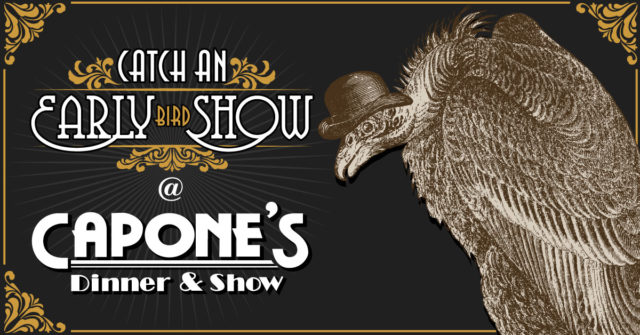 Capone’s Dinner & Show often offers early shows and matinees. One such early show is fast approaching. On April 6, 2019, an early show will be performed at 5:00 p.m.  It’s an early bird special and a theater performance too! Get in for half price – call in your reservation at 407-397-2378 or order tickets online. Have a great meal and see a delightful show. There will still be daylight when you leave the theater. Time to have fun at other places, or go home and relax. Other early shows are listed as they are scheduled and can be found on the Showtimes page.

History of the Early Bird Special

The first written record of an “early bird special” dates back to July 12, 1904. There was a sale on men’s summer underwear at a department store named Olds, Wortman and King. I guess in Oregon, July would still be considered ‘early’ for summer underwear? Later in the 30s, stores used early bird specials during the first few hours after a store opened. Get your fedora on sale while they last!

Furthermore, early bird specials began appearing with food-related deals in the 20s. Ads promoting “early bird breakfasts” were adopted by restaurants across the country. The term didn’t get paired with dinner and supper until the 50s. However, it was highly popular in Florida, especially in the 80s and 90s. This is also when ‘early bird specials’ became associated with the elderly. It was even written into a script in a 1985 episode of The Golden Girls (set in Miami, Florida).

If you’ve heard the phrase “the early bird catches the worm,” you’re familiar with an old English proverb. It dates back to 1605! The phrase is often used to motivate teens to get up early, encourage employees for success and describe morning people. 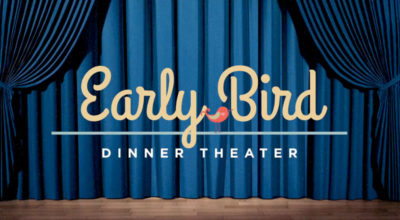 If you live or have visited Clearwater, Florida, you may have heard of Ed Fletcher’s Early Bird Dinner Theatre. If you are in the area, we highly recommend checking it out. Like Capone’s Dinner & Show, this theater has been around for over 25 years. It is a popular attraction in Tampa Bay. Their shows are funny and entertaining. Dinner is buffet-style provided by an onsite catering company. Additionally, a full-service bar is on site. Unlike Capone’s, it is not open every evening and the show varies. Visit them on the web or call 727-446-5898 for more information.

Regardless of when you like to eat, it’s hard to beat Capone’s Dinner & Show in the Orlando/Kissimmee area.  Attend the upcoming early show and enjoy an early bird special fit for your entire flock. It doesn’t take a jailbird to figure out the advantage of getting out early!