Al and the gang wish to congratulate William Buchholz for being January’s Grand Prize winner at Capone’s Dinner & Show last evening. During our “25 Years of Memories” anniversary celebration we’ll be giving some lucky stiff a grand prize on the 25th day of each month. Next month it could be you! The next grand prize will be awarded on Saturday, February 25, 2017 (late show).

William, a.k.a. Dollar Bill (now that he is a ‘made’ man) came all the way from Niagara Falls, N.Y. just to see the show! Imagine that. What a dedicated family member. He looked kind of familiar, so the wise guys did some snooping around. A snitch explained that ol’ Dollar Bill has attended the speakeasy before. Three times in fact. So not only is he a ‘made’ man, he is a repeat offender. Just the way we like ‘em. 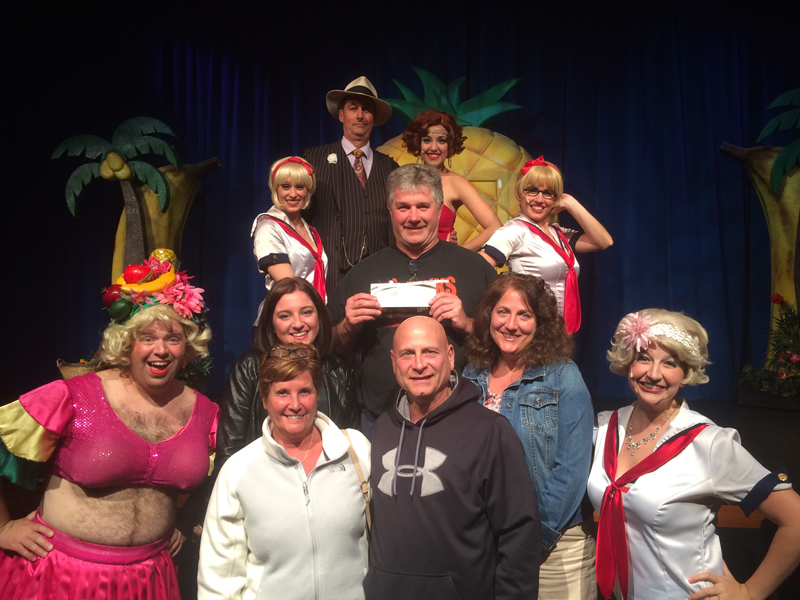 Dollar Bill and his gang celebrate winning the grand prize with the cast from Capone’s.

Dollar Bill’s favorite part of the show is the impromptu interaction between Al’s gang and the guests. You better believe it. Our mob is quick on their feet serving up drinks and whatnot, as well as quick one-liners. Our goons and doll faces can bump gums with the best of ‘em.

Last night during the intermission, Dollar Bill’s least favorite part of the evening, most guests were refreshing their drinks, stretching their legs and visiting the ‘private room.’ You’d think this means the restroom, but not for Dollar Bill. We think he might have snuck up to the OTHER private room, the Four Deuces Lounge. If you’ve not checked it out, do so on your next visit. Better yet, upgrade your ticket to VIP status and hang out with some real characters in the lounge before the evening starts.

Of course, during the intermission Dollar Bill could have been checking on the bets he’s plannin’ on making. The wise guys have it from a very reliable source that he will most likely waste his winnings at a casino. Who knows? Maybe he’ll strike it rich. As part of the family, we all get our ‘cut,’ right William?

Spread the news about our show to all your friends. Dollar Bill’s friends told him about Capone’s Dinner & Show and look where it got him – a grand prize winner!

Again, we’d like to congratulate January’s grand prize winner, William Buchholz. Capone’s Dinner & Show hopes that the evening’s experience was the cat’s meow and will be a great memory for the Buchholz gang for years to come.