By Carla Sinclair-Wells on August 16, 2016 in Popular Theme Park Rides 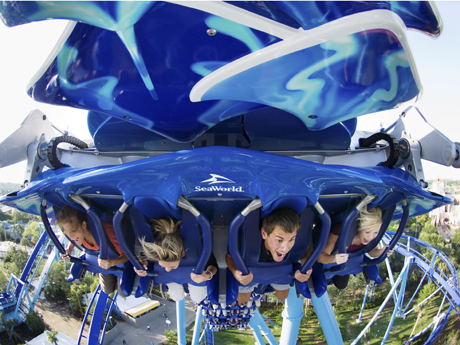 When the Wise Guys originally started following National Roller Coaster Day in 2013, the folks that operate Behind the Thrills website, polled their readers. They announced the top 10 roller coasters in the United States. Our Central Florida theme parks were the best! In fact, SeaWorld Orlando landed two of the top ten. Busch Gardens, Islands of Adventure, Disney World and Hollywood Studios were also awarded a spot in the top ten.

The poll included the highest ranking roller coasters by various organizations. They were sectioned into wooden rides and steel roller rides. Our Florida theme parks did well with Rock-n-Roller Coaster in 10th place; The Incredible Hulk in 6th; Montu took 5th; Kraken was 4th and the number one roller coaster at that time was Manta.

Zoom, loop, drop or barrel roll ahead a few years and National Roller Coaster Day looks a little different for Orlando’s theme parks in 2016. SeaWorld has added Mako. Universal Studios has added Skull Island: Reign of Kong. Busch Gardens has added Cobra’s Curse, and Disney added Seven Dwarfs Mine Train in 2014. The competition is steep and Central Florida has a lot more of it! Theme parks across the country are upping the standards with new thrills and technology.

“The virtual reality roller coaster experience is a new hot trend that hit the market this year and has the potential to be game changing,” says Colleen Mangone, spokeswoman for the International Association of Amusement Parks & Attractions.

No doubt the new roller coasters in Central Florida will rank high. They continue to be a big draw for many tourists. Why else would our theme parks be adding and improving them? If you are a roller coaster junky, you’ll no doubt be celebrating National Roller Coaster Day with a few minutes spent on your favorite thrill ride. Enjoy the day and the ride!

Celebrate Other Specials on the Calendar

Today has also been designated as “National Tell a Joke Day” and “National Rum Day” as well as a host of other holiday’s you’ll not find on most calendars. For thrill-seekers in Florida, you can feel lucky to have so many great roller coasters in the area to seek that thrill from. There are also plenty of places to hear and joke and drink rum.

Meanwhile, at Capone’s Dinner & Show, we are unable to help you celebrate National Roller Coaster Day. However, we’ll help you celebrate National Rum Day as well as National Tell a Joke Day. Come in tonight, or any night of the year and we’ll treat you to Al’s famous unlimited rum runners. The show is a thrill for many of our families, without the gForces, of course! Many guests do have a blast here! As for National Tell a Joke Day, well, come see the show at Capone’s. We’re sure to tell a joke or two!

The Wise Guys have updated this post for your reading pleasure. It was originally featured on Al’s Blog August 16, 2013.