By Carla Sinclair-Wells on September 25, 2013 in Orlando Tourism News

Writing about the final performance of the anniversary show at Capone’s Dinner & Show got me thinking about another final performance. This “show” is one that has been a fun thing to do in Orlando and has fascinated hundreds of people twice a day since November 1986. The ducks at the Peabody Orlando hotel will perform for the last time this coming Monday, September 30, 2013. 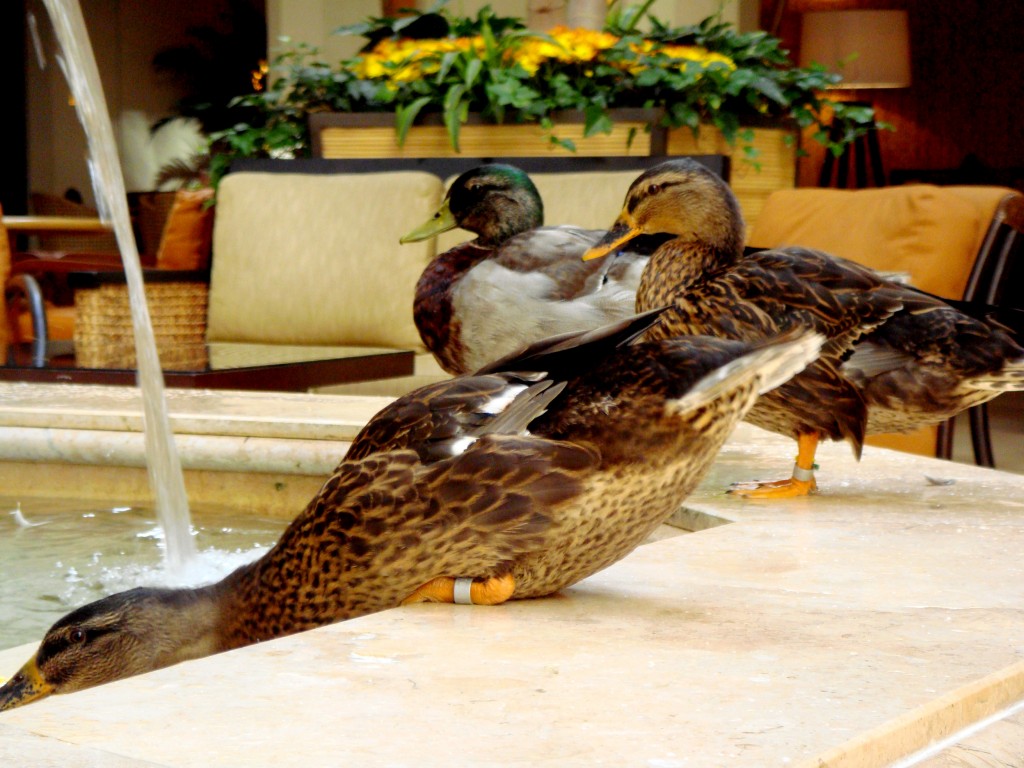 The tradition of the Peabody ducks parading from their penthouse to the luxurious Orlando hotel’s fountain for a swim every day at 11:00 a.m., then back to the $100,000 Royal Duck Palace at 5:00 p.m. has mesmerized guests and visitors for 27 years. Back when the Orlando hotel was built, there wasn’t a lot to do in the I-Drive area as there is now. However, tourists flocked (pun intended) to see the ducks each day. The performances also helped the Orange County Convention Center extend their focus to include concerts, circuses and other special events in Orlando.

So how did this tradition begin? Well, it started in Memphis, where the first Peabody hotel was built in the late 1920s or early 30s. Seems the hotel manager, Frank Schutt, and his friend, Chip Barwick, had been out hunting ducks (and staying warm in the duck blind with an adult beverage or two) and upon their return, they placed their decoys in the Peabody’s fountain. Without any other pressing news in Memphis, it created a lot of attention, and the Peabody got a lot of publicity for this stunt. Frank figured if decoys could get them this much attention, just think what real ducks would do! So he met with a local farmer and brought in ducks, treated them with the same attentive service and fine furnishings as his guests, and the rest is history.

Peabody Orlando was purchased by Hyatt Hotels Corp for $717 million, and they have no desire to keep the ducks on the roof, or in the fountain. It is believed that most of the current staff at the hotel will stay on as employees of Hyatt. The ducks will retire to an undisclosed farm and live out their days in less luxury than they’ve ever known. In the past, all ducks after 5 years of service are retired to a farm to then be release into the wild. Knowing how many animals are schedule-conditioned, it kind of makes you wonder what the ducks will think or do when 11 a.m. and 5 p.m. rolls around…

If you are in the I-Drive area in the next few days and want something fun to do (you might even make a special trip), go see the ducks perform one last time. Listen to John Philip Sousa’s King Cotton March and watch the ducks exit the elevator and step up into the fountain, or exit the fountain and march back to the elevator. Then say “goodbye” and purchase a discounted duck souvenir from the Orlando gift shop. Traditions are hard to come by these days, and Orlando will certainly miss the Peabody ducks.

After you watch the ducks, uphold another tradition and make a reservation at Capone’s Dinner & Show. This dinner theater is just down the road from the Peabody Orlando on Highway 192. If it’s Monday, Wednesday or Friday, you’ll be able to see another show that will soom be retiring. “Marvel Strikes Back” is a production that has only been performed for a little over a year, in celebration of Capone’s 20th anniversary. This Orlando dinner show has been a tradition for many guests who return again and again for many celebrations, or for a fun thing to do. So if you haven’t seen this particular show with its new story line, you still have a few more opportunities. After October 11, the cast will perform the original sequel, “Bugs Creates Chaos” every night while preparing for the holiday show which opens on Thanksgiving Day.

Whether it’s the ducks at the Peabody or some quacky characters at Capone’s, or both, check out these traditions while you can. If you want to keep these Orlando shows around, let your duck calls be heard! There is an online petition at Change.org that many people are signing in support of the ducks, and as always, you can leave your comments about Capone’s Dinner & Show right here on Al’s Blog. Don’t ruffle too many feathers, or your comments may not be posted!

Orlando Dinner Show: Last 10 Performances of “Marvel Strikes Back”
This Central Florida Attraction Will Amaze You!