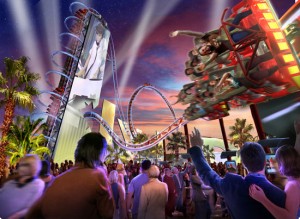 Universal Studios Orlando has re-opened its Hollywood Rip Ride Rockit coaster after a long, sudden closure about 6 weeks ago.  There have been rumors flying around about the reason for the closure and there was even speculation that Universal might remove the ride altogether due to severe issues.

Since the re-opening on October 28th, guests are saying the trains are new, or refurbished, and the ride experience has been improved.  This is good news since this ride was considered to be too rough for some.  Universal has been very vague about the reasons behind the long closure, and when asked about the re-opening, all they said was “We are excited that Hollywood Rip Ride Rockit has re-opened after its maintenance period.”  Hmmmm, not much information there, but at least the ride is now open, and improved.  This innovative ride features cutting-edge technology and features three 1st-time maneuvers:  the Double Take, the world’s largest non-inverted loop; the Treble Clef, where guests burst through a building façade on track shaped like the music symbol; and the Jump Cut, a spiraling, negative-gravity move. Not only that, but riders get to choose their own music, and cameras capture the entire experience.  Guests can purchase the DVD and take home their own ‘music video’ of their experience.

After rockin’ on the coaster, let the music and party continue. Visit Capone’s Dinner & Show, just down the road from Central Florida’s theme parks. Be sure to catch this show while you’re in town!