By admin on December 11, 2018 in Holiday Specials, Orlando Shows & Theatre, Worth the Drive 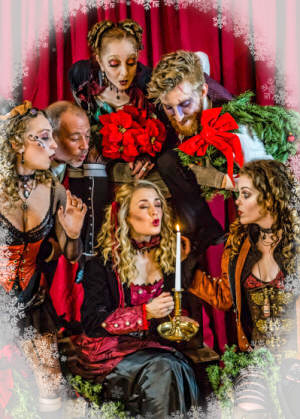 For those of you not wanting to let Halloween go, but still, like the idea of Christmas, the Phantasmagoria Christmas Carol is a unique show for you. A Christmas Carol: A Ghost Story of Christmas is being performed at smaller theaters throughout Central Florida, most notably on Saturday, December 22 at 2pm and 7:30pm at the Wayne Densch Performing Arts Center in Sanford.  It could possibly be the most intriguing performance you’ll ever experience.

If you are not familiar with “phantasmagoria,” you are not alone. Until a controversial video game came on the scene in 1995 (and only continued a few years), few people had even heard of this word. Phantasmagoria is an exhibition of optical effects and illusions, usually in a bizarre fashion. Think horror theatre combined with a circus; a séance combined with a magic show; steampunk combined with Victorian fantasy. That should give you some idea of the what this unique show might offer. Now add in the story of Charles Dickens’ “A Christmas Carol” and you’ve got a very interesting performance!

John DiDonna is the founder of Orlando’s Phantasmagoria. He is also a teacher at Valencia College and has directed performances at most every theater company in the Central Florida area. He often finds performers to fill his roles at other Orlando theater performances. For example, the current queen at Medieval Times Orlando dinner show has been known to perform in the Phantasmagoria troupe.

Who is This Unique Show Suitable For?

If you are not certain this unique show is for you, think again. Last year tickets to the performances sold fast. Even kids can enjoy the movement, dance, puppetry, projections, music and storytelling. Just make sure they understand this is one of the most famous ghost stories of all times. While it may be a familiar story, this performance may be the most intriguing you’ve ever experienced.

For tickets, visit the Phantasmagoria’s website and select the performance and location you’d like tickets for. Most tickets start at $20, however, VIP packages are available at some theaters which include early entry, a souvenir, drink and post-show performance.

Speaking of unique shows… Capone’s Dinner & Show is one-of-a-kind, not found in any other area. Kids of all ages will have a blast here too. You won’t find any scrooges around here though. Al’s a generous fella and puts out a spread for his guests each night and even includes unlimited beverages. Just don’t go drinking too many. A ghost of your own Christmas past may find you in the most ‘phantasmagoria’ way!

So if you are up to seeing a unique show this holiday season, check out the Phantasmagoria’s “A Christmas Carol, A Ghost Story of Christmas.” Then save a night for Capone’s and check out our speakeasy and cabaret. This time of the year, we feature a unique show filled with holiday favorites. We’ll see you, hopefully in the past, present and future!