Disney World’s holiday events start earlier than most other Orlando theme parks and attractions. During this time of the year, it truly is magical. Be sure to get a multi-park pass and plan on spending time in each park. Each has something special to offer.

After spending a day at the theme parks, be sure to save a night for Capone’s Dinner & Show. It is the best dinner show value you will experience in Orlando!

Let the holidays begin! Last week marked the beginning of Walt Disney World’s holiday events schedule. The Orlando theme park is decorated down to the smallest of detail and the festivities are already in motion. Mickey’s Very Merry Christmas Party began November 7th and continues  on select nights through December 22. Select from several special nights in which an additional park ticket offers delightful joys of the season. Families can sip cocoa, catch a “snowflake,” enjoy a holiday parade, fireworks and live entertainment. Tickets purchased online for this special event start at $91.00 for adults and $86.00 for ages 3 to 9. If you want to visit the theme parks during the day, you’ll need an additional ticket.

This year returning guests to Hollywood Studios will miss the Osborne Family Spectacle of Dancing Lights. However, if you love “Frozen,” you’ll be delighted to participate in the First Time in Forever: A Frozen Sing-Along Celebration. It is hilarious, yet heartwarming retelling of Anna an Elsa’s amazing Frozen adventure. Your standard admission to Disney’s Hollywood Studios theme park includes this show. 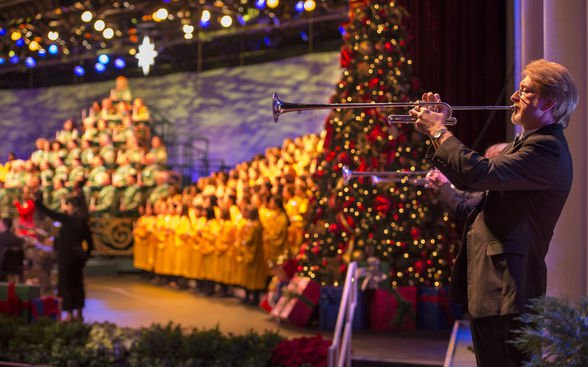 Also in November, the Holidays Around the World Candlelight Processional begins November 25 – December 30 in Epcot. The event retells the story of Christmas with a celebrity narrator, 50-piece orchestra and a mass choir. This unforgettable spectacle is held 3 times a day (evening) during the holiday season at 5pm, 6:45pm & 8:15pm. To ensure you have a seat, purchase a Candlelight Dinner Package which includes a lunch or dinner, and most importantly, a guaranteed seating section for the Candlelight Processional and fireworks.  This will most definitely get you in the spirit!

Guest Narrators for 2016 include:

At Disney’s Animal Kingdom theme park you can meet Mickey and Minnie at Adventurers Outpost. This is one of the best opportunities for a perfect Christmas card photo. Of course, Mickey and Minnie are dressed in their holiday best!

With many new stores open at Disney Springs, visitors to this free Disney experience will get a first peek at many popular gifts offered this year. The holiday décor is sure to be spectacular too. Bring the little ones to see Santa at the Marketplace.

It’s a great time of the year to visit Disney. Watch Cinderella’s Castle transform into a glistening ice palace for the holidays. It is sure to be a memorable holiday. Let the celebration begin!