When you think of dinner entertainment for a night out on the town, what comes to mind? Most likely your first thought is not to attend a professional wrestling dinner theater. Yet, six times a year, you can join a sold-out crowd and enjoy such a dinner show.

In 2014 the new Manor Professional Wrestling Dinner Theater was mentioned in an article about new restaurant attractions. While newcomers were welcomed, we also said goodbye to other area dinner shows that closed their doors. Now, 5 years later, the Manor has seemed to have reached a happy platform and is still in the ring.

By limiting the number of shows performed to 6 per year, it is easier to attain a sell-out crowd. The wrestlers also have plenty of time to work on their performance. You see, the storyline at this professional wrestling dinner theater is every bit as important as the physical nature of the performance. 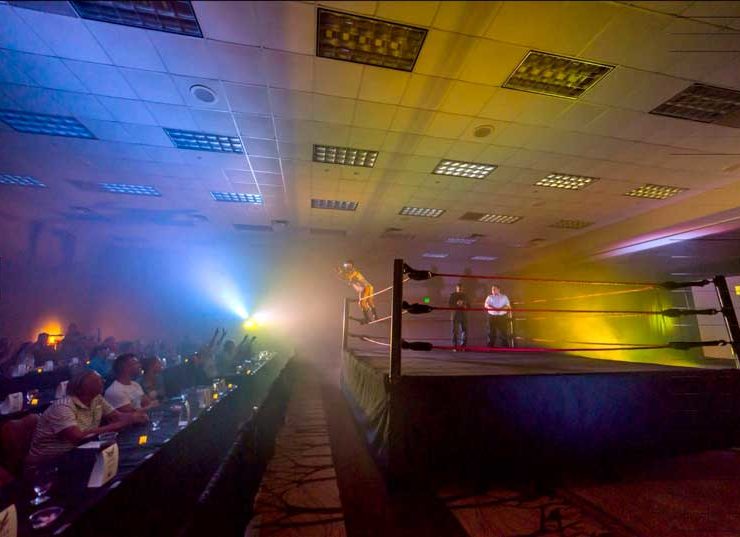 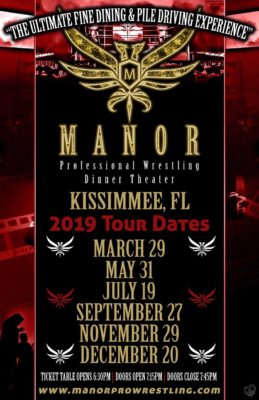 The performance is all about good and evil. Lady Golden Eyes had entertained the village with only the best talent around. Meanwhile, a jealous Lord Darkness had other intentions in mind. He cast a spell upon the Manor and half of the performers turned evil. When both leaders disappear, chaos ensues and it is every warrior for themselves. It’s village vs. village in a contest to see who will win the prized Manor Medallion. Who will you cheer for?

Furthermore, the actual wrestling at the Manor Professional Wrestling Dinner Theater is not “real,” however, the acting is. It takes a great amount of skill to throw a fake punch. Consequently, if you don’t think it hurts to be tossed about a wrestling ring, think again! These actor/wrestlers are very fit performers. Their energy is contagious as well.

Fine Dining (in a sense)

Dinner courses are served throughout the show. The menu consists of tossed green salad, oven roasted chicken, green beans or vegetable medley, mashed potatoes and dinner rolls. Additionally, cheesecake is served for dessert. Beverages include ice tea, lemonade, coffee and water in which you replenish yourself at a beverage station.

Consequently, if you are not able to get into the July 19 show, reserve tickets at a future performance. Shows are tentatively set for September 27, November 29 and December 20. Check out their website for next years’ schedule at manorprowrestling.com. You may also send an email requesting reservations, especially if you are looking for a group discount.

Finally, the Manor Professional Wrestling Dinner Theater is performed at Osceola Heritage Park, located next to the Silver Spurs Arena at 1875 Silver Spur Lane, Kissimmee, FL 34744. If you go, enjoy the blend of body slams and spandex; dropkicks and dropped jaws. This is sure to be a fun, unusual night out on the town. 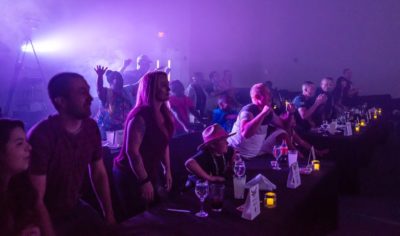 If verbal cheap shots and tag teams of ‘trouble boys’ are your thing, why not check out the gang at Capone’s Dinner & Show. They’re open (nearly) every night of the year and offer a great entertainment value. Their cast consists of some hysterical characters whose antics will ‘flair flop’ their way right into your heart. Before your vacation’s three-count, be sure to save a night for Capone’s. It’s one dinner show ring you won’t soon “fa-get-a-bout-it.”