By Carla Sinclair-Wells on March 26, 2014 in Orlando Tourism News

It’s not easy being an attraction AND a restaurant, however, Capone’s Dinner & Show proves it can be done. Showing stamina within both categories, this Kissimmee restaurant and Central Florida attraction has withstood the test of time for over 20 years. As a dinner theater, you have several elements that need to be good to be successful, including your show (to be an attraction), and your food (to be a restaurant).

Many dinner shows have come and gone, including the recent closing of Arabian Nights, a show that only made it about one year Rat Pack & Friends, and the not-so-recent closing of Dolly Partin’s Dixieland Stampede. Two new smaller Orlando dinner shows have opened fairly recently. They include Treasure Tavern (adults only) and an unusual one called Manor Professional Wrestling Dinner Theater. Time will only tell if they have both, a great show and food, to have any longevity.

Then you have the Kissimmee restaurants that have opened and closed recently, which are far too numerous to list. If you travel along Hwy. 192 or along I-Drive, it seems the Orlando & Kissimmee restaurants and businesses change on a regular basis. Just recently a new Chuy’s opened at I-Shops (intersection of Sand Lake Road and I-Drive). Hopefully, the decision to add this Texas-based chain restaurant was supported by the success of their existing Kissimmee restaurant on Hwy. 192.

There are also themed dining restaurants within the Orlando attractions that have come and gone. You can read about several restaurants coming to Universal Studios in one of our earlier posts. Speaking of Universal, it is also noteworthy to mention Emeril’s Tchoup Chop, within Loews Royal Pacific Resort, will be undergoing several enhancements – including a new chef, manager, lunch & dinner menus and expanded offerings in the sushi bar. They are one of only two Orlando restaurants that feature cuisine prepared in a Robata Grill, and have been at it for over a decade! 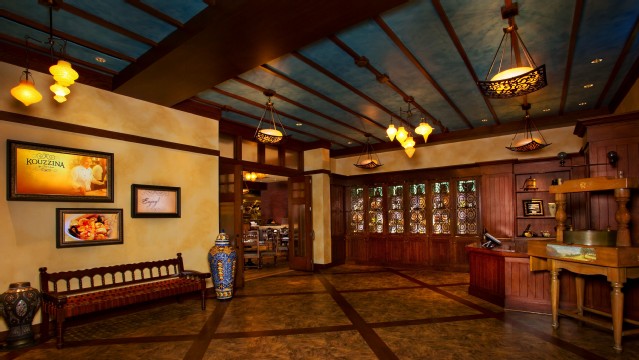 Kouzzina by Cat Cora®, located at Disney’s BoardWalk is set to close later this year.

Disney will also have its share of themed restaurants opening and closing. We just recently heard the announcement that Kouzzina by Cat Cora® at Disney’s Boardwalk will be closing after September 30th this year. It was open for five years, and celebrity chef Cat Cora (Food Network’s Iron Chef America) created a great experience for numerous families that dined at this Walt Disney World Resort restaurant. There have been no announcements as to what will replace Kouzinna. Other Disney BoardWalk restaurants that remain open include Big River Grille & Brewing Works, ESPN Club and the Flying Fish Cafe as well as several other smaller eateries.

With Tommy Guns in tow, the gangsters at Capone’s Dinner & Show will continue to defend their turf in the mix of Kissimmee restaurants and Orlando attractions. The wise guys (and dames) seem to have it figured out. If you’ve never experienced this Orlando attraction, and are looking for a great Kissimmee restaurant, their value-based dinner show is definitely worth a visit. Step back in time, and “don’ worry ‘bout” the restaurants and attractions that will come and go. Just enjoy the show & food – Big Al is here to stay!