With Fat Tuesday on February 13th this year, Mardi Gras events at Universal Studios are in full swing now through April 7, 2018. You can “catch the beads, catch the music, catch the spirit” without going to New Orleans! It’s a party the entire family will enjoy.

New this year: New floats representing a celestial theme. Performers are available before the parade for meet and greet/photo opportunities. Atmospheric music piped into the park.

Previously the Orlando theme park celebrated this event only on the weekends. This year the celebration happens every night. You can catch beads and doubloons by the handful as the spectacular parade winds its way through the park with dazzling floats, colorful costumes, towering stilt walkers, entertaining street performers and dancers. Many of the floats are professionally built by Blaine Kern Studios, who have been creating Mardi Gras floats in New Orleans for over 60 years. 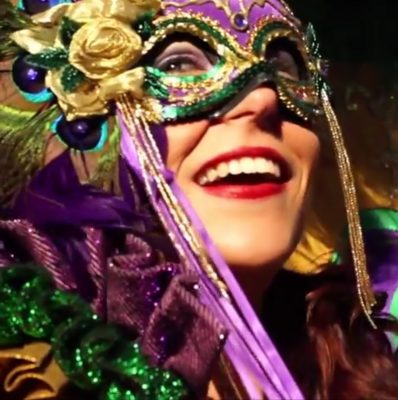 The parade happens at Universal Studios every night in which the Mardi Gras event is held. The parade starts about an hour before the headline concert. Between 5:15 and 7:45 p.m. However, if you want a good spot for the parade, it is not unlikely for people to line the parade route a couple hours prior to the start. Concert lines can start as early as the morning of the event!

Since adults will be adults, if you are attending this event with small children, you may want to stay close to the Little Jester’s Parade viewing area which is located in front of the Brown Derby Hat Shop (near the Terminator 2: 3-D attraction). Avoid the Music Plaza area as this is where people line up for the concert and can get a little crazy. Fun if you’re an adult. Not so fun if you are a parent with an inquisitive child.

Some big names in music will be performing live at the Universal Music Plaza stage. There is also live music in the French Quarter section of the theme park, as well as authentic Cajun cuisine. I can hear the Zydeco music and taste the Jambalaya already!

After you’ve caught all the beads and listened to some great live music, continue the party at Universal CityWalk on Mardi Gras event nights. Your Universal Studios theme park ticket or Annual Pass gets you FREE admission to several unique clubs and bars (provided you’re at least 21 years of age). CityWalk is open every night until 2:00 am.

Additionally, Mardi Gras is included with your Universal Studios admission or annual pass. They have on-site hotel deals as well as Florida resident tickets and specials. Check their website for more information www.universalorlando.com.

If you are not the type to attend a major theme park on Fat Tuesday, but still want to get out and do something fun, there are other options. Downtown Orlando will have its share of parties as well as many other bars around town. If you feel like taking a drive, go to New Smyrna Beach. Spend a day at the beautiful beach and stay for the Mardi Gras parade (mentioned here in another post). It really is a fun time. Of course, in Kissimmee, you can’t go wrong by attending a dinner show like Capone’s.

When you’re not at Universal Studios enjoying Mardi Gras, Capone’s Dinner & Show would like to invite you to the most enjoyable dinner theatre in Central Florida. Read our reviews and comments. Our live stage production is enjoyed by all ages and will have you dancing and singing and having a great time before you enter the theater. Tickets are half price when you purchase them online. Save a night for Capone’s Dinner & Show. It’s a blast!